Onnawasta (Ash: oadnawasda, lit. "sunrise-sunset", IPA [ˈɔ̯͡ɑʔ.ᵈn̠ɐˌwɑs̠.t̠ɐ]) is an anglicisation of the name of a simple symbol simultaneously representing the two eponymous events of the day as a circle for the sun with a line for the horizon drawn through it, like the Unicode symbol ⦵ ("circle with horizontal bar") at code point U+29B5. It is a popular design in many contexts.

Originally emblematic of a cyclic (conservative, unchanging) worldview, it has come to take on an almost opposite, progressive meaning of looking to the future as each day passes. 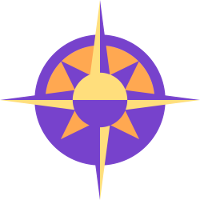 The emblem of the coastal town of Appa is a more intricate version of an onnawasta.

The emblem simultaneously depicts the rising sun (oadna) coming up from behind the two mountains (represented by the pair of darker diagonal triangles in the upper half) that Appa lies in front of, as well as the setting sun (oasda) on the sea horizon. The passage of the sun between these two points is itself seen as symbolic of the migratory history of Appa's founders, originally dwelling on the peaks. The four-point compass rose represents the nautical life associated with the seaside location (note also that the words oadna and oasda refer to the cardinal directions associated with sunrise and sunset when a locative suffix is attached).