Kiwi (natively known as taʻ rī kiwinikaʻ, IPA: /tǎʔ rɪː kɪˌwɪɲɪˈkáʔ/) refers to the constructed language supposedly spoken on Easter Island, constructed by Waahlis. The language was devised as an effort to screw with the minds of marine biologists, as well as a hypothetical language for Pagurus prideaux.

The Kiwi language is constructed to be agglutinative, for a change, yet retains the simple phonotactics of Polynesian languages. The phonology is simple by Europan standards, as is the orthography. Morphology and grammar show clear influences from Ojibwe, Navajo and to a certain degree, Spanish. The most interesting bits of information on the language is that is has a very weak word-final stress, lacks adjectives and adverbs, and that is a hyper intelligent shade of blue.

Kiwi has 12 consonants, some of which show great allophony. It is unusual in that it has no proper fricatives; only the pseudo-fricative /h/.

The Kiwi dorsal nasals and plosives assimilate to the following vowel in the syllable. The near-front mid to high vowels /e̞ː/ and /ɪ/ thus act palatalising. Likewise, the back and near-back vowels uvularise the consonants. 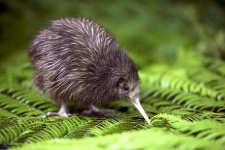 The language's namesake. So damn cute. Known as kikiwī in the Kiwi language.

The language distinguishes 7 different vowel qualities, 3 of which display differences in length.

Short, unrounded vowels in the Kiwi language get labialised, or rounded, when they follow a labial consonant.

Kiwi has a sophisticated system of tones, as well as stress. Only final syllables may get tone, and all final syllables but those with a glottal stop coda, get a medium, default tone.

There are four tones in the language, medium, rising and falling, low, and high tone. The last three tones only occur when a vowel precedes a word-final glottal stop, all others get a medium tone.

Kiwi phonotactics follow the same pattern as most Polynesian languages. Kiwi syllables may contain one consonant in the onset, or there is no onset. Syllables with no onset contrast with syllables beginning with the glottal stop: /ɑˈlaː/ ('hi') contrasts with /ʔɑˈlaː/ ('to be whole'). Codas and consonant clusters are normally prohibited in the phonotactics Austronesian languages, but Kiwi allows a final glottal stop as a syllable coda. It is elided if the following syllable has an onset.

The syllable has a minimum of one vowel. A one-vowel syllable has any one of the short or long vowels. Any vowel clusters form diaereses.

The structure of the Kiwi syllable can be represented as being (C)V(C), where the round brackets around C and second C mean that a syllable-initial or syllable-final consonant is optional.

There are 9 inherent noun classes, c, in the Kiwi language. These do to some extent govern obviation, and agreement with adjectives. They are mainly dependent upon size and edibility.

Every class has an adjectivising prefix, ADZ, which creates adverbs and adjectives from nouns and verbs.

Since the classes are relatively defined, it is not morphologically marked which class a noun belongs to. The prefixes are instead fixed on nouns to derive adjectives and adverbs. And epenthic glottal stop, <ʻ> is added if two vowels collide.

Word order is most often irrelevant, since Kiwi is more or less non-configurational. See Syntax for further information.

Moai statues on Easter Island, called moʻai in Kiwi, as well as a few wild horses. Horses are called tototō, by the way.

Pluralisation works as usual, and adjectivized nouns are simply pluralised before the class prefix is attached. See Plural for further information.

The language has two numbers, the paucal and the plural. This means that there is no singular grammatical number.

The paucal denotes singular entity nouns, as well as a few nouns, or a small group. It is equivalent to the English singular, but less defined. The paucal is the lemma form of the nouns, and thus implicitly unmarked.

The plural number in Kiwi is used with a big number of objects, or many of them. It is basically similar to the English plural, except smaller groups of objects class as paucal. Pluralisation of nouns is rather straightforward; plurals are formed through initial partial reduplication. The reduplication is phonologically governed.

The zeroth person and indefiniteness

The so-called zeroth person (0) in the Kiwi language, is a catch-all indefinite pronoun. It is used to convey the following meanings:

The fourth person and obviation

There are a few basic rules for the Kiwi fourth person:

The Kiwi language does mark grammatical tense morphologically. However, the system is binary one; non-future (nfut) versus future (fut). To specify whether something occurs in the present or in the past, you make use of adverbs, or more commonly, adverbial noun phrases.

There is no unipersonal agreement in the Kiwi language; an intransitive verb, one that does not take an object, dos not conjugate according to the subject. Instead you use the personal pronouns or noun phrase in question.

The bipersonal prefixes agree with both the subject and the object simultaneously. They have the following transivity direction: subject>object