Volapük (Template:IPAc-en in English;[1] [volaˈpyk] in Volapük) is a constructed language created between 1879 and 1880 by Johann Martin Schleyer, a Roman Catholic priest in Baden, Germany, who believed that God had told him in a dream to create an international language. Volapük conventions took place in 1884 (Friedrichshafen), 1887 (Munich) and 1889 (Paris). The first two conventions used German, and the last conference used only Volapük. In 1889, there were an estimated 283 clubs, 25 periodicals in or about Volapük, and 316 textbooks in 25 languages;[2] at that time the language claimed nearly a million adherents.[3] Volapük was largely displaced between late 19th and early 20th century by Esperanto.[4]

Commemorative inscription for J. M. Schleyer on the wall of the parsonage in Litzelstetten, Konstanz, written in Volapük and German:

Schleyer first published a sketch of Volapük in May 1879 in Sionsharfe, a Catholic poetry magazine of which he was editor. This was followed in 1880 by a full-length book in German. Schleyer himself did not write books on Volapük in other languages, but other authors soon did.

The Dutch cryptographer Auguste Kerckhoffs was for a number of years Director of the Academy of Volapük, and introduced the movement to several countries.Template:Fix The French Association for the Propagation of Volapük was authorized on 8 April 1886, with A. Lourdelet as President and a central committee that included the deputy Edgar Raoul-Duval.[6] However, tensions arose between Kerckhoffs and others in the Academy, who wanted reforms made to the language, and Schleyer, who insisted strongly on retaining his proprietary rights. This led to schism, with much of the Academy abandoning Schleyer's Volapük in favor of Idiom Neutral and other new constructed language projects. Another reason for the decline of Volapük may have been the rise of Esperanto. In 1887 the first Esperanto book (Unua Libro) was published. Many Volapük clubs became Esperanto clubs.Template:Fix

By 1890 the movement was in disarray, with violent arguments among the members. Schleyer resigned from the Volapük Academy and created a rival academy. Derived languages such as Nal Bino, Balta, Bopal, Spelin, Dil and Orba were invented and quickly forgotten.[7][8]

In the 1920s, Arie de Jong, with the consent of the leaders of the small remnant of Volapük speakers, made a revision of Volapük which was published in 1931 (now called Volapük Nulik "New Volapük" as opposed to the Volapük Rigik 'Original Volapük' of Schleyer). This revision was accepted by the few speakers of the language. De Jong simplified the grammar, eliminating some rarely used verb forms, and eliminated some gendered pronouns and gendered verb endings. He also rehabilitated the phoneme /r/ and used it to make some morphemes more recognizable. For instance, lömib "rain" became rein.[9] Volapük enjoyed a brief renewal of popularity in the Netherlands and Germany under de Jong's leadership, but was suppressed (along with other constructed languages) in countries under Nazi rule and never recovered.

Regarding the success of this artificial language, the Spanish scientist Santiago Ramón y Cajal wrote in the first edition of his Tonics of Willingness, in 1898:

However, some years later (1920), in the third edition of the same book, he added the following footnote to the former assertion: "As it was presumable, nowadays -1920-, the brand new Volapük has been forgotten definitively. We forecast the same for Esperanto."

Large Volapük collections are held by the International Esperanto Museum[11] in Vienna, Austria; the Center for Documentation and Study about the International Language in La Chaux-de-Fonds, Switzerland; and the American Philosophical Society in Philadelphia, Pennsylvania.[12] In 2000 there were an estimated 20 Volapük speakers in the world.[13]

In December 2007 it was reported that the Volapük version of Wikipedia had recently jumped to 15th place among language editions, with more than 112,000 articles. [14] A few months earlier there had been only 797 articles. The massive increase in the size of "Vükiped", bringing it ahead of the Esperanto Wikipedia, was due to an enthusiast who had used a computer program to automatically create geographical articles, many on small villages. The motive was to gain visibility for the language.[15] By March 2013 the Esperanto Wikipedia, with a very active user community, had risen to 176,792 articles, while the Volapük Wikipedia had at that point 119,091 articles.[16]

There has been a continuous Volapük speaker community since Schleyer's time, with an unbroken succession of Cifals (leaders). These were:

Schleyer proposed alternate forms for the umlaut vowels, but they were rarely used.

The letters ä, ö, and ü do not have alternative forms such as the ae, oe, and ue of German, but Schleyer proposed alternate forms ꞛ, ꞝ, and ꞟ for them, all of which are part of Unicode since version 7.0 released in June 2014:[24]

There are no diphthongs; each vowel letter is pronounced separately.

The author Alfred A. Post mentions in his Comprehensive Volapük Grammar some additional letters created by Schleyer: 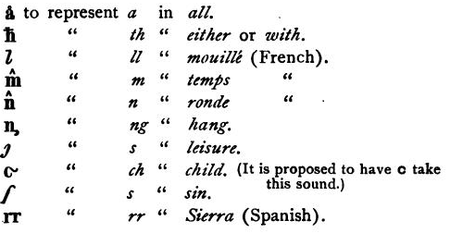 Most of these letters can already be found in Unicode:

Schleyer's 1880 Volapük as well as Modern Volapük has minimal l–r pairs such as rel "religion" versus lel "iron".

Polysyllabic words are always stressed on the final vowel; for example, neai "never" is pronounced [ne.a.ˈi]. (However, the question clitic "-li" does not affect the stress of the word it attaches to.) Where there is secondary stress, as is found in the compounding of several roots together, it is found on the final syllable between the roots.

Schleyer adapted the vocabulary mostly from English, with a smattering of German and French. Some words remain readily recognizable for a speaker of one of the source languages, but many others are modified beyond easy recognition.[26] For instance, vol and pük are derived from the English words world and speak. Although unimportant linguistically, and regardless of the simplicity and consistency of the stress rule, these deformations were greatly mocked by the language's detractors. It seems to have been Schleyer's intention, however, to alter its loan words in such a way that they would be hard to recognise, thus losing their ties to the languages (and, by extension, nations) from which they came. Conversely, Esperanto and Interlingua are commonly criticized as being much easier to learn for Europeans than for those with non-European native languages.

The grammar is based on that of typical European languages, but with an agglutinative character: grammatical inflections are indicated by stringing together separate affixes for each element of meaning.

Nouns inflect for case and number, but not for gender.

The following is the declension of the Volapük word vol "world":

As in German, the Volapük noun has four cases: nominative, genitive, dative and accusative. In compound words, the first part of the compound is usually separated from the second by the genitive termination -a, e.g. Vola-pük, "of-world language": "language of the world". However, the other case endings (-e dative, -i accusative) are sometimes used if applicable, or the roots may be agglutinated in the nominative, with no separating vowel.

Adjectives, formed by the suffix -ik, normally follow the noun they qualify. They do not agree with the noun in number and case in that position, but do if they precede the noun, are separated from it by intervening words, or stand alone. Adverbs are formed by suffixing -o, either to the root or to the adjectival -ik (gudik "good", gudiko "well"); they normally follow the verb or adjective they modify.

The pronouns begin with o-. In the singular, they are ob "I", ol "thou", om "he/it", of "she", os (impersonal),[27] on "one", ok "oneself". They are pluralized with -s: obs "we", ols "ye", oms "they". The possessive may be formed with either the genitive -a or with adjectival -ik: oba or obik "my". Prepositions, conjunctions and interjections are also formed from noun roots by appending appropriate suffixes.

The verb carries a fine degree of detail, with morphemes marking tense, aspect, voice, person, number and (in the third person) the subject's gender. However, many of these categories are optional, and a verb can stand in an unmarked state. A Volapük verb can be conjugated in 1,584 ways (including infinitives and reflexives).[28]

For the simple present, the pronouns are suffixed to the verb stem:

The three tenses in the indicative, and the three perfect aspects, each take a characteristic vowel prefix:

The present-tense prefix is omitted in the active voice, so:

These are seen as being more distant from the present tense the further the vowel is from [a] in vowel space, and they can be used with temporal words to indicate distance in the past or future. For example, from del 'day',

The passive voice is formed with p-, and here the a is required for the present tense:

The infinitive is formed with the suffix -ön. It can be combined with tense/aspect prefixes:

Yes–no questions are indicated with the particle li:

The hyphen indicates that the syllable li does not take stress. It occurs before the verb to avoid a sequence of three consonants or a double el: li-pälogol? li-binoms?

Participles and the habitual aspect

Participles, both active and passive, are formed in -öl:

Binob penöl is literally 'I am writing', though penob is also used. For "I write" as habitual action, the habitual aspect is used. This is formed by adding -i- after the tense prefix, and here again the present-tense a- is required. The forms are thus active ai-, äi-, ei-, ii-, oi-, ui-, passive pai-, päi-, pei-, pii-, poi-, pui-. All are pronounced as two syllables.

Aifidob bodi I eat bread (as a daily occurrence), äipenob penedis I used to write letters.

aidelo daily (at the present time)

Gololöd! Go! (to one person), gololsöd! go! (to more than one person)

Optative -ös is used for courteous requests, and jussive -öz an emphatic command.

Conditionals are formed with -la for the protasis (if-clause) and -öv for the apodosis (then-clause):

Note that the tense changes as well, so that in the first example the past tense is used even though the present tense is intended. Like the question particle, the -la is written with a hyphen to indicate that it is not stressed in speech.

A potential mood is formed with -öx:

Reflexive forms are made from the active voice and the pronoun ok:

In the third person, the periphrastic form of vatükomok (he washes himself) must use the reflexive pronoun, vatükom oki, as vatükom omi would mean "he washes him (someone else)".

The plural -s may precede or follow the reflexive, as the speaker chooses:

Here there is a meaningful distinction between joining the pronoun to the verb, and inflecting it independently:

Löfobsok we love ourselves, löfobs obis we love each other.

Translation: When one is learning another language, vocabulary presents difficulties. One must continuously search for unknown words, and consequently interest is lost. In the elementary part, however, this problem has been overcome, because the relevant translation of each word appears below the Volapük words. A selection of readings follows, and it is suggested that the Volapük words be read out loud. The grammar and a basic vocabulary have already been done in the introduction; nevertheless, a quick glance at the translation is recommended to ensure that the overall meaning has been acquired. There is a maxim which states that a little study a day is better than a lot of study all at once.

The word Volapük or a variation thereof means "nonsense, gibberish" in certain languages, such as Danish[29] volapyk and Esperanto volapukaĵo.[30] In Russian, the term Volapuk encoding refers to writing Cyrillic letters with the Latin alphabet based on what they look like, for example writing “BOJTATTI-OK” instead of волапюк.