∅ is a language spoken by twenty-eight people on a tiny island in the middle of the northern Pacific, who has remained hidden for millennia without anyone having known of them or them having known about anyone. In fact, they would not have been discovered if a military satellite had not picked up their heat signatures. At the discovery of this people, linguists immediately flocked to the island to study a language that they described as “bizarre” and “nothing like I’ve ever encountered before.” One linguist described their communication as “making absolutely no sound at all, not even eye contact.”

With their Chomskyian education and a copy of the Lingua Descriptive Studies Questionnaire, these bright young geniuses were able to decipher the underlying workings of their deceptively silent tongue.

The phonology of ∅ was the linguists’ first great hurdle, however thanks to the breakthroughs of comparative linguistics, the linguists were able to figure that the consonant inventory must contain stops and two manners of articulation.

The allophony of ∅ is peculiar in that literally every single phone is realized as [∅]. Although one field linguist claims to have heard a native cough[citation needed], which could have been a realization of /k/.

Like the consonants, all three of these vowels are realized as [∅] in all contexts.

Word order is most likely underlying SOV. Adjectives and adverbs are featured either before or after their head. Causes are right-branching and follow the relative pronoun, /ki/ [∅∅]. The first sentence ever translated by a native, much to the surprise of the field linguists, shed much-needed light on the language's functions.

This sentence was especially surprising since none of the twenty-eight natives claimed to have ever seen a car, yet they still had a word for it! This suggested that ∅'s lexicon has been preparing its speakers via linguistic determinism for their inevitable colonization. 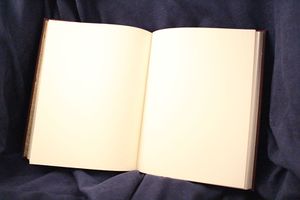 The Bible translated into ∅

As predicted, ∅ follows all of the principles of universal grammar that is required upon every language.

Nouns decline for all the cases known to Europe.

Verbs conjugate for person (1, 2, 3), number (S, P), tense (PST, FUT), aspect (PFV, IMPF, PROG, SIM), mood (what is this, again?), and probably something else that our bright linguists just consider to be another mood.

The Lexicon was definitely the most amazing aspect of the ∅ language. Since all there words were complete silence, linguists were able make up whatever they wanted to so that the language made sense.