Ithkuil, [iːθˈkuːɪl], is an experimental constructed language created by American linguist John Quijada,[1] designed to express deeper levels of human cognition briefly yet overtly and clearly, particularly with regard to human categorization. Presented as a cross between an a priori philosophical and a logical language striving to minimize the ambiguities and semantic vagueness found in natural human languages,[2] Ithkuil is notable for its grammatical complexity and extensive phoneme inventory, the latter being simplified in the final version of the language. The name "Ithkuil" is an anglicized form of Îţkûil, which in the original form roughly means "hypothetical representation of a language".[2] Quijada states he did not create Ithkuil to be auxiliary or used in everyday conversations, but rather to serve as a language for more elaborate and profound fields where more insightful thoughts are expected, such as philosophy, arts, science and politics.[3]

The many examples from the original grammar book[2] show that a message, like a meaningful phrase or a sentence, can usually be expressed in Ithkuil with fewer sounds, or lexically distinct speech-elements, than in natural human languages. For example, the two-word Ithkuil sentence "Tram-mļöi hhâsmařpţuktôx" can be translated into English as "On the contrary, I think it may turn out that this rugged mountain range trails off at some point".[2] Quijada sees his strictly regular creation as too complex to have developed naturally, but nonetheless as a language suited to human conversation. No person, including Quijada himself, is known to be able to speak Ithkuil fluently.

Three versions of the language have been publicized: the initial version in 2004, a simplified version called Ilaksh in 2007, and the version in 2011, with additional updates on the morphophonology and lexicon. As of 2019, a new (yet to be named) language is being developed by Quijada based on Ithkuil.

In 2004[4]—and again in 2009[5] with Ilaksh—Ithkuil was featured in the Russian-language popular science and IT magazine Computerra. In 2008, David Peterson awarded it the Smiley Award.[6] In 2013, Bartłomiej Kamiński codified the language to be able to quickly parse complicated sentences.[7] Since July 2015, Quijada has published several Ithkuil music voiced by Peterson under the album Kaduatán, which translates to "Wayfarers". 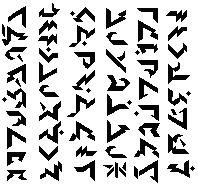 For his influences, Quijada cites the obscure "morpho-phonology of Abkhaz verb complexes, the moods of verbs of certain American Indian languages, the aspectual system of Niger–Kordofanian languages, the nominal case systems of Basque and Dagestanian languages, the enclitic system of the Wakashan languages, the positional orientation systems of Tzeltal and Guugu Yimithirr, the Semitic triliteral root morphology, and the hearsay and possessive categories of Suzette Elgin's Láadan language". The writing system's logical design borrows principles from Ethiopic and Brahmi scripts, but employs a unique morpho-phonemic principle.[2] The script used throughout the Ithkuil grammar bears superficial resemblance to Hebrew square script and the various Klingon fonts, and Ilaksh has also used a "cartouche script" and a cursive format. Because Ithkuil is designed for users to be precise in their speech, it is quite difficult to express humorous concepts in Ithkuil.[8]

The initial publication of Ithkuil in 2004 had an extensive phonology of 65 consonants and 17 vowels. Since the mention of Ithkuil in the Russian magazine Computerra,[4] several speakers of Russian contacted Quijada and expressed enthusiasm to learn Ithkuil for its application to psychonetics, with several complaining about its difficulty in pronunciation. Quijada remade Ithkuil's morphophonology with 30 consonants and 10 vowels (and the addition of tones) and published the revision on 10 June 2007 as Ilaksh.[2] The language featured other amendments to grammar, including some additional Levels and a change of Cases. It was redesigned to be easier to speak and included an additional writing system.[9][10] The initial sequential "informal" system suitable for handwriting or compact typesetting, and a "formal" logographic system with artistic possibilities resembling Maya scripts.

In the "informal" writing system, several parallel sets of lines are shaped to correspond sequentially to the different parallel sets of lexemes and inflections. It is directly pronounceable. The author designed it with reserve for convenient handwriting. The overall design would permit compact, clear, black-and-white rendering.

In the colorful "formal" script, a single complex glyph represented an entire sentence. Diversely shaped, shaded and superimposed cartouches represent the syntactic relations of the verb and noun phrases of a sentence. The edges of the cartouches had particular shapes that indicate one set of inflections, the colors indicate another set of inflections, and the textures yet another one. On the cartouches, letters of hexagonal outline would spell out the forms of particular lexemes. The cartouches formed phrases, with primary phrases overlapping subordinate phrases. The coloring system utilized different color densities and texturing for different colors in order to be usable by colorblind people. These density conventions also allowed the formal system to be inexpensively printed in black-and-white, or inscribed or imprinted on stone or other materials.[11]

Ilaksh was superseded by a newer language, also termed Ithkuil because of its ties to the initial publication. Its script uses a unique morpho-phonemic principle that allows sentences representing grammatical categories to be pronounced in multiple ways as the speaker sees fit. As of July 2011, Quijada planned to adopt the cartouche script "for use as an alternative, 'ornamental' writing system for artistic purposes" to the newest revision of Ithkuil, which was made to be morphologically similar to Ilaksh.

Owing to complaints about the difficult patterns in the language morphology from the community Reddit forum, on 30 October 2017, Quijada published a tentative outline for a new version of the language, which has yet to be named, addressing learners' desires for a more agglutinative morphophonology, including a restructured Formative outline, and extended use of Adjuncts for flexible expression of the grammar to further create phonoaesthetics. Despite the complexity of the language, intended only as an experiment without concern for the constraints of human learnability, he has published several updates for a new language predicated off of the original grammar.

"Tram-mļöi hhâsmařpţuktôx" written in the Ithkuil script. English translation: "On the contrary, I think it may turn out that this rugged mountain range trails off at some point"

Ithkuil uses a morphophonemic script because characters convey both phonetic and morphological information. Its use is closely tied to Ithkuil's grammatical system, which allows much of the phonological aspect of words to be morpho-syntactically inferred. Those parts of an Ithkuil word whose pronunciation is predictable are not written, whereas the characters used to indicate the pronunciation of the unpredictable parts of a word also convey the grammatical information necessary to reconstruct the implicit phonetics. Words are thus written in a highly abbreviated manner, particularly useful for the highly inflected, occasionally elongated words of the Ithkuil language. The script is also used alphabetically for transliterating foreign words and mathematical expressions.[12]

The newly revised Ithkuil has 45 consonants and 13 vowels. At the left of each cell in the table below is the phoneme, and at the right its transliterated representation if it is not written the same in IPA as in romanized Ithkuil. The consonants are as follows:[13]

/m n̪ ŋ l ɽ/ can be syllabic. All consonants except /j w ʔ/ can be geminated; when geminated, h is a bidental fricative or a pharyngeal fricative (ħ), and ɽ is an alveolar trill. In a future revision of the language, Quijada has noted that cʰ, c’ čʰ, č’, kʰ, k’, ļ, pʰ, p’, q, qʰ, q’, ř, tʰ, t’, and xh will be eliminated, x will be pronounced /x/~/χ/, /ɬ/ will only be an allophone of word-initial /l̥/ (voiceless approximant) and be written as hl, ň will be written as n before k, g, or x, and dh will instead be written as ḑ, as in the 2004 version of Ithkuil (this phoneme can optionally be written as đ or ḍ, but ḑ is preferred).

Ithkuil words can be divided into just two parts of speech, formatives and adjuncts. Formatives can function both as nouns and as verbs, derived from the root and depending on the morpho-semantic context.[14]

Roots are Ithkuil's most basic semantic units. All Ithkuil formatives are derived from a limited number of roots. Each root consists of a cluster of 1–4 consonants (five-consonant clusters are also available, but remain without an assigned meaning).[14] The current lexicon of Ithkuil can potentially consist of approximately 3,600 word roots.[14] So far, just over 1000 have been assigned translations.[15] From the root, word stems are formed by affixing the vocalic affix that indicates pattern, stem type, and function, and by stressing a particular syllable to indicate informal or formal designation.[14][16]

All Ithkuil formatives, whether functioning as nouns or verbs, inflect for various grammatical categories that are quite dissimilar from any of those in natural languages.[16] Quantization is more or less covered by the grammatical categories of Configuration, Affiliation, and Perspective, even though these do not technically refer to number per se.[16]

There are 96 grammatical cases in Ithkuil, one special case being the Vocative, used for direct address. Verbal formatives inflect for case under Frame constructions (i.e., dependent clauses). The grammatical cases of Ithkuil can be divided into several distinct groups:[17]

Several distinct grammatical categories apply only to verbal formatives. These are listed below:[18]

Ithkuil nominal formatives also carry a function, but cannot be inflected for them, always remaining in the "stative".[18]

Ithkuil uses a variety of affixes, termed suffixes, to further delineate what is described by the formative.

There are two types of adjuncts in Ithkuil: personal-reference adjuncts and verbal adjuncts.[14] All adjuncts are highly synthetic.

Verbal adjuncts are adjuncts that work in conjunction with verbal formatives to provide information about the latter's Valence, Level, Phase, Sanction, Illocution, Modality, Aspect, and Bias.[14] Of these, Modality and Level can only be indicated using verbal adjuncts, whereas the others can also be expressed on the verbal formative.[20]

Ithkuil uses a base 100 numeral system with roots for the numbers 1 to 10, and a stem-specific derivative suffix used with a number root to add a multiple of 10, providing the numerals up to 99. Ithkuil did not originally use the concept of zero. Numbers greater than 100 are expressed periphrastically in speech, whereas a special numerical script had logograms for the numbers 1 to 100 and exponential powers of 100.

The Sapir–Whorf hypothesis postulates that a person's language influences their perceptions and cognitive patterns. Stanislav Kozlovsky proposed[4] in the Russian popular-scientific magazine Computerra that a fluent speaker of Ithkuil, accordingly, would think "about five or six times as fast" as a speaker of a typical natural language. The Sapir–Whorf hypothesis would suggest that, Ithkuil being an extremely precise and synthetic language, its speakers would have a more discerning, deeper understanding both of everyday situations and of broader phenomena, and of abstract philosophical categories.

However, strong forms of the hypothesis, which postulate that language determines thought and not only influences it, have been disproven within mainstream linguistics.[21] Moreover, in line with this, Quijada has stated he does not believe a speaker would think necessarily any faster, because even though Ithkuil is terse, a single word requires a lot more thought before it can be spoken than it would in a natural language.[22]

"For these reasons, I believe use of Ithkuil would probably allow one to think more deeply, critically, and analytically; but think faster? I doubt it."

Kozlovsky also likened Ithkuil to the fictional Speedtalk from Robert A. Heinlein's novella Gulf, and contrasted both languages with the Newspeak of the communicationally restricted society of Orwell's Nineteen Eighty-Four. Ithkuil is by far the most complete language of the three, though Speedtalk and Newspeak were merely "sampled" by their creators, with an outline of neither grammar nor lexicon. John Quijada acknowledged the similarity of Ithkuil's design goals to those of Speedtalk,[3] remarking that,