The IPA symbol is shown after the romanization if they aren't the same.

Word-final schwa is not pronounced, unless preceded by an approximant 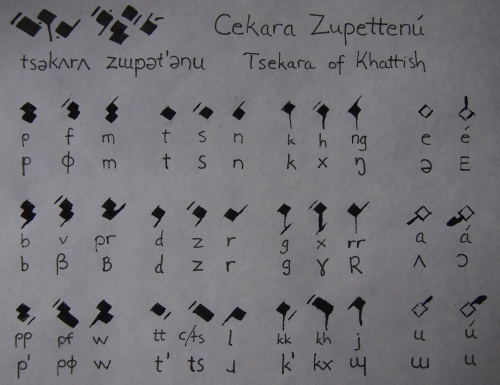 Formal Khattish uses featural abjad script Cekara shown above with its romanization. Diacritics are marked in educational materials and words out of context, sometimes in place names as well. Older systems indicated stress with "strong" diacritic dashes as opposed to dot-like "weak" diacritics. The diacritics have evolved into elaborate decorations in the Razáfian calligraphy.

There is some controversy of the creator of Khattish script due to a great loss of historical records during the years under Western Tyranny of the sixth era:

Lightlisteners name shinesharer saint Gunda Tliwirshu as the designer, based on the remaining parts of his chronicles written on the island of Guard already in the third era, around 470. They claim that she had to create a translation of the Book of Light and even a new script "for those living in the darkness; poor natives to whom, alas, our beautiful language [Rinapri] is nothing but birds' singing".

Since the language has changed much during these millennia, supporters of the Lafan school believe that the script was coined in 4th era around year 400 by Narrif Tsero, one of the most productive Khat linguists, who used Kher and Northern runic scripts (not used anymore) as the base. The new script managed to spread just in time before the decline of Khat culture and was finally revived after the of the collapse of Western Tyranny in the sixth era more than two thousand years later by Teke Kále. Much later, in the seventh era 290, the founder of New Khat Empire, Sekkute I, used the script as a national romantic example of pure Khattish culture, not contaminated by this Westlang.

Nouns of Khattish have two grammatical genders, animate (AN) and inanimate (IN), which are characteristic to words and not explicitly shown. Animate class contains all living creatures and their body parts while inanimate

Nouns have two numbers, singular and plural, and the plural is formed by voicing the consonant of the stressed syllable (second or last).