Medyestani (Medyestani Alphabet: (Eʒvan) Meδȷecтani or Meðȷecтani, also called Meadean), meaning approximately Middle-land-ish, is an Indo-European constructed art language created by Ceige at some indefinite time between 2012 and 2014. In-universe, it is spoken primarily in the Medyestani Confederacy of the same name. The language's classification is somewhat problematic, as it in some cases displays strong Iranian features, while in other cases it appears to be better suited to being a separate branch of Indo-Iranian. Furthermore, it appears to have influences of the Germanic and Slavic branches. From an in-universe perspective though, with these language families not quite existing, it is considered less of an issue.

The Medyestani language was influenced primarily by the languages of Eurasia, and while it appears primarily Iranian influenced, it is in fact also inspired by Celtic, Germanic, Slavic, Sanskrit, and Turkic. The associated conculture is also influenced by these cultures. The goal was to create a culture and language that mirrored that of the existing Persian cultures in real life, in order to better understand them from a historical perspective (as opposed to simply thinking "ah, they're just Middle-Eastern").
There is also some desire to use the language for a work of fiction, but that requires substantial effort, and the author does not feel that it is time to put that burden on what they feel to be a very young project.

The Medyestani Confederacy is a social, political and military alliance between various close cultures, towns, city states and lands that act as a rough equivalent to a nation state. The lingua franca of these lands is Medyestani, which in turn has an influence on the language, which draws features from several Sprachbunds. 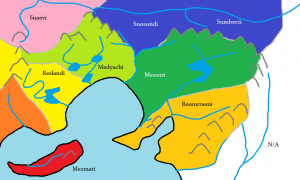 An anorthographic map of (most of) Medyestan, with dialect areas labelled

Somewhat unlike contemporary dialect theory, Medyestani does not really possess a standard dialect or register. Or, rather, the speaker community does not seem to perceive one, instead referring to a central dialect called Medyachi. The dialect structure is as such:

Across these dialects, there are overarching "registers". For example, the most formal register differs between d and ð, which for the vast majority are merged, and does not represent common consonant assimilation of established terms in writing. Using the above dialect names as examples, Ressurraeni would be written Restsundraeni. The common-most register simply writes things in their most neutral pronunciations, except for newer or informal compounds. The colloquial register involves many regionalisms and new vocabulary, and can be overwhelming for older generations and those unacquainted with it.

When on paper, Medyestani is rather agglutinative, speakers tend to avoid using it too much for clarity's sake.

Nouns are not modified for case, which is unfortunate, since the common-most word order is SOV. In addition, people may refer to persons as nouns instead of pronouns, while still using the appropriate person endings in verb conjugation. In light of this, speakers occasionally use dative-style prepositional constructions to get around ambiguous cases.

Nominal plurals take -i, unless they end in -a, in which case it becomes either -ae, or -ai, with -ai becoming more common due to regularisation.

Various affixes can be added to nouns to create new vocabulary. One common one is -ar, which is usually used for agents of actions. Things are made slightly complicated by some non-productive uses of otherwise normally productive affixes, such as in kshedar (power), and kshederiya (warrior).

There are also various diminutives used for names of ethnic groups or objects, such as -ak. Occasionally identifying these can be difficult if vowels have blended together, like in yezuk (language/dialect). It's important to remember that -a- (/-e-) is not a stable vowel in such cases.

Abstraction can be achieved by -iya, which represents a merger of both Proto-Indo-European *-i-eh2 and Medyestani -i with a dummy vowel at the end.

The common-most adjective suffix is -i from Proto-Indo-European *-ikos. Occasionally, the diminutive is used alongside -ikos to create a suffix like -chi.

Not only is the system much more simplified compared to Proto-Indo-European, but even the remaining -i/-in distinction is not strictly enforced. In addition, -in may sometimes be used regardless of person to emphasise that the subject is plural.

In increasingly rare cases, a special formal 2nd person suffix -ish or -esh is used, but its usage is still common enough to make worth noting, lest the learning speaker be caught unaware.

The past tense uses the suffix -t, which occasionally can trigger sound shifts. For example, another d or t before it may change to s, a v derived from prior b may shift to f while a v from w may cause a vowel change while changing the -t to -d-.

Technically speaking, -an is the infinitive ending, however it can be used like a participle, although whether it is active or passive is inferred from context. For disambiguation between the infinitive and use of the infinitive as a verb noun, -eni is sometimes preferred (and similarly, -edi and -endi also exist, although they are used less often, although the -i helps with abstraction of the adjectival meaning).

Participles are commonly used with the copula, although there exists some modal verb constructions for things such as the perfect or continuous, which is achieved by using the verb dan (to do, to place).