The Moran languages (known as Teqavi in Mtari) is spoken on the Mora Islands, located in the South Ocean (Ištaxvi). The family consists of five languages, which form a dialect continuum. Prior to the Mtari colonization Moran languages were also spoken on the continent of Irgva. Two languages (Tipmeđaqoh and Išiartoh) had survived long enough on the Afartot peninsula to be documented, but they both became extinct along with many other native Irgva langauges. The Mtari colony (called Mtovrex) expanded greatly occupying almost the third of the continent and all the useful land available there and the native population was either assimilated or simply went extinct. The exact amount of Moran languages is unknown, since almost all Continental Moran languages were not documented and even their names remain a mystery to modern Mtari scholars).

There is evidence of a culture associated with Proto-Moran speakers on the eastern part of the Irgva continent as early as 4,000 years ago followed by a gradual expansion southward over the next 1,500 years to the Afartot peninsula. The Mora islands became inhabited approximately 2,500 years ago almost at the same time, when climate was changing and the Afartot peninsula was slowly turning into a dry steppe and later - a desert. A eastward expansion about 1,000 year ago was the last one. It was the time, when the East Moran group began forming.

The Moran languages were the first language family to have been contacted by the Mtari colonists and, besides Yrharian, they are the only living native language family of Irgva, despite not being spoken on the mainland anymore. Grammatically, they haven't been influenced by Mtari overy much, and still retain a remarkably large amount of its native vocabulary, even though many Mtari loanwords enter these languages. 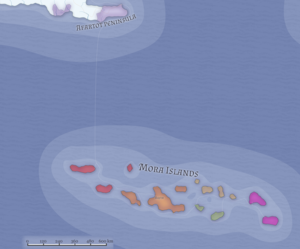 The Moran languages form linkages with each other, which were formed from a dialect continuum. The linguistic innovations shared by adjacent languages define three intersecting subgroups (four, if counting extinct continental languages):

There are no generally accepted relations between Moran and other known language families. A distant genetic relation to the Yrharian family has been considered, but very little reliable cognates were found in the basic vocabulary. Even most of established cognates are uncertain, since their phonological correspodences are highly irregular and are usually restricted to just one or two words. There is no doubt, that Proto-Moran had genetic relatives in the past, however, all of them had probably become extinct by now.