Currently I am not working on this, but hopefully I can return to this important language later.

Morphologically somewhere between isolating and agglunative.

Longer duration of consonants is indicated in the script by doubling the letter: pellee [peɭ:e:]

Longer duration of vowels is also indicated in the script with double letters. 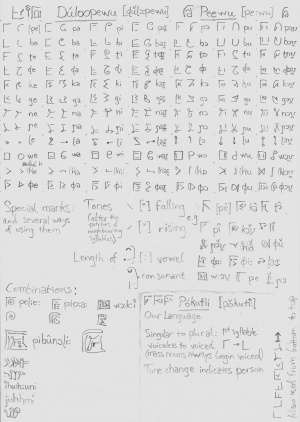 Dúloopewu is the official, slightly featural abugida of Pókutiì used in formal writing. Faster demotic Peewu is approaching syllabic script since vowel marks are fused into the consonant graphemes.

Graphemes can be fused into one larger like matryoshka dolls. The script is written from left to right or from bottom to top (when turned 90 degrees counter-clockwise) and sometimes with a combination of these ("fan writing" from left bottom vertically up and then horizontally to rigth).