Hello, and welcome to my Linguifex user page!

Hi, my name is Nicolás and I'm from Argentina.

Having been interested in language for as long as I can remember, I first started crafting languages when I was about 12 years old (ca. 2000) and did so for the following two or three years. After that there was a hiatus in which I achieved a lot of other things, but didn't produce any new conlang-related material. Starting again ca. 2012, I've been both adding to my old projects and developing many new ones.

My native language is Rioplatense Spanish (Bonaerense), and I've been learning English since my early childhood. I've also been learning German for quite some years (C2), Finnish and Italian for much less.

I'm passionate about and enjoy learning languages, and also about their history and many intricacies. I also like travelling to get to know the different aspects of the cultures of the world. Besides designing languages and writing systems, I study philosophy (undergraduate) and also like to read, draw and make music.

Even though my tastes have changed over the years (the main difference being an increasing emphasis in historical linguistics) most of my conlangs still fit in the definition of artlangs, in particular, a priori naturalistic artlangs. That is, they are not built upon any natural language or language family, yet they strive to be not more nor less complex as any given natural language, while their purpose is that of an artistic endeavour and their development is strongly driven by their particular aesthetic (and not, for instance, the search for a purportedly superior effectivity or the intent of making them specifically easy to learn, as is the case with other kinds of conlangs[1]). Nevertheless, even though that's the kind of conlang I mostly make, I enjoy a wide variety of styles and genres across the whole spectrum of the craft.

Please take into account that this listing may be considered to be a work in process in at least two senses: 1) existing conlangs are still being wikified, and 2) new conlangs will continue expanding it.

These are the conlangs I created when I first started crafting languages, when I was about 12 years old (ca. 2000) and for the following two or three years. I'm very fond of this early creations, and I've started a revamping process to take advantage of the knowledge I've gained in the years passed since their original conception and bring them back. From this time I have mostly sketches, all in paper; most of the languages and sketches also have their own writing systems.

These are the conlangs I started crafting after having had a hiatus in my activity, starting again ca. 2012.

Some of the samples featured here I had originally wrote up for a thread in the Facebook group "Constructed Languages", of which I'm also a member of the administration team. The task was proposed as a small game: "From all your conlangs, pick one word to represent the language and describe it!".

These are some of the documented conlangs, by language family, in no particular order: 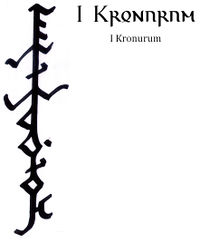 Rendition of the name I Kronurum in one of the native orthographies, a gautification, and a romanization

The language known as I Kronurum (IK) is a part of the Northern Languages linguistic family, which populates the northern region of the central continent.

Notwithstanding the several subgroups that have split from this branch at different stages, this Central Branch of the family has been studied as a continuity in which four main stages can be identified: Ancient IK (AIK), Old IK (OIK), Middle IK (MIK; together with Early-MIK, EMIK) and Modern IK (MoIK; together with Early-MoIK, EMoIK).

The developmental stage presented in this article is that of Middle IK (MIK). At this stage, a group of OIK speakers has already moved westwards from the AIK speaker's cultural Urheimat, which was located in the plains in the northern region of the central continent. MIK is thus the main variety spoken in the region nearby and at the shores of the northern sea.

The endonym of this region is Ifarka, which is translated as "The Land". It is divided in several administrative provinces or marks, called Igódánafáreþ (translated as "Marks"), which hold periodical meetings regarding whichever matters would affect the generality of the Hold.

The language known as the Haššûl [ħɐ.'ʃ:u:l] is the common language of The Yar-Beššel (name given to the Kingdom of Yar-Beššel proper and its neighbouring vassal counties), as well as of the nearby region known as The Riverlands (organized in a -comparatively- looser adjunction of fiefdoms and acting as a federation, with a politically and economically friendly relationship with the Kingdom). There are many different languages being spoken in The Riverlands, some more related to each other than others, but all riverlanders speak the Haššûl as well. On the contrary, being it the principal language of the Kingdom, most of its inhabitants are native speakers of the Haššûl while they know little, if anything, of the indigenous languages of the neighbouring Riverlands. For outsiders, there is a certain impression of linguistic and cultural homogeneity in the region, since the Haššûl is the language they would expect everyone to be able to speak anywhere near the Yar-Beššel and The Riverlands, and to which they would refer to as the "local tongue".

Languages of the Riverlands

The language known as Ufi (Middle Ufi) is a part of the Ufi-Pî linguistic family.

Shares areal features with some of the Northern Languages

An attempt at a stereotypical yet interesting orkish language

The Romà language, called internally "a dinc nòsta" («אנסת ךניד ה», «ا طينك نوسثا», «ⴰ ⴷⵉⵏⴽ ⵏⵧⵙⵜⴰ»), “our language”, is a Western Iberian Romance language of the Pyrenean-Mozarabic group. With ca. 1500 speakers, it’s a highly endangered language. Most of its speakers live around the comune of Dagràn, Taghramt, Morocco (Fahr Anjra prefecture, Tanger-Tetuán region).
Considered one of the "languages of aljamía", it had its highest point of developement and spread around the ninth century. Compared with its palaeographic registers, the language doesn’t seem to have changed all too much since then.

This language is a project thought of as an exercise on creativity within constraints. The goal is to make something new starting from a very definite framework of restrictions, using nordic morphology and word stock (with an eclectical choice of sources – using Old Norse, Proto-norse and North Germanic reflexes) and a pseudo-esperantic grammatical scaffolding (following aspects of Esperanto morphology and syntax). The aesthetic goal is to achieve the same kind of through-the-looking-glass feeling Esperanto has with regard to its Romance resonance, but with Old Norse.

Even though it is in principle a stand-alone exercise, Mininorsk has potential for expansion and might be expanded upon in the future.

An eclectic admixture of Bairisch and North Germanic elements and influences.

Proto-Indo-European goes for a ride on the shoulders of "The Tree".

A conlang with an a priori grammar of central semitic inspiration and an a posteriori vocabulary of Ibero-Romance inspiration.