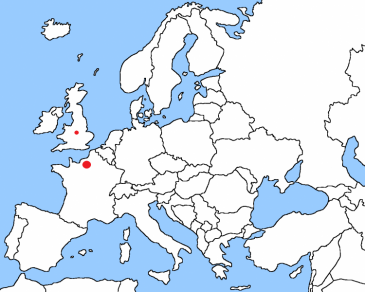 Westlondic is an Oxman dialect, a West-Germanic language spoken in the Duché du Héron (= Shire of Le Héron), a shire that corresponds to the eastern region of Seine-Marirtime in France. This language has evolved from the Old Oxman dialect spoken in Westlands (Westlondes in Oxman, Westlonden or Wesslonnen in Westlondic). Old Oxman which evolved from Old Auregan which is the first recorded form of Auregan language. Auregan language area corresponds to the "Vexin Normand" (a region situated just south to "Duché du héron"). Westlondic is a West-Germanic language that is strongly linked to Oxman, Dutch, Modern English, Low German and Modern German.

Here is a table which sums up the main characteristics of this language:

Oxman has also twenty diphthongs, that is clusters of two vowels pronounced with a single emission of air. These diphthongs are:

The position of stress in this language is quite regular, because it falls on the root and thus there are few rules to observe:

Oxman language has got only two genders: common gender and neuter gender. The previously masculine and feminine words have merged into the common gender, whereas neuter words have remained neuter, even if in some cases there has been a gender switch.

Nouns can be both singular (denoting just one object) and plural (denoting more than one object). The formation of plural is simple, because there is only one ways to form it:

The adjectives always precede the noun to whom they refer. Adjectives take a single -e ending when the noun it refers to is common, or at plural form. Singular neuter nouns don't cause endings on the adjectives.

The higher degree comparative is formed with the suffix '-er'. The second term of comparation is introduced by donn and is in the same case of the first, ex.:

Just like in English and somtimes in Dutch, long adjectives form their comparative by adding the word 'meer' before the adjective. It corresponds to the 'more' formation in English.

Some adjectives have got an irregular form of higher degree comparative:

The superlative degree is formed with the suffix '-st/-est' (some irregular adjectives form it with '-st').

Adjectives with an irregular superlative

The same adjectives that have an irregular higher degree comparative have got also an irregular superlative form:

Numerals don't inflect. Here are the numerals from 0 to 100:

Here are some very important verbs, their auxiliary verb for compound tenses and their meaning:

Indefinites give us incomplete informations, because they don't define the precise quantity or the identity: