PAH was a Semitic language, and that means it generally derives all words from bi-, tri-, or quadra-consonantal roots. Vowels and consonants were added around and between the root letters to produce nouns declensions and verb conjugations. Traditionally, Arabic studies illustrate derivational patterns using √K-T-B, Akkadian studies √P-R-S, and Hebrew studies √P-'-L or √Q-T-L. Fujisaka-san, unaware of these precedents, used √M-Ŋ-K (PS √M-Š-K) as his paradigmatic root, and we will do the same. The root letters are written in capital letters, while the affixed letters are written in minuscule. For example, MaŊaKti could be applied to √S-T-N as SaTaNti.

In English, roles of nouns are communicated by word order. In other languages (such as Greek or Latin), words have their endings changed to show this function, which is called "case." PAH nouns, adjectives, and verbal nouns inflected for case. Theoretically, any word order should then have been possible, but PAH retained VSO about half the time.

The PAH cases are Direct, Genitive, and Indirect. Ideally, all three cases can be clearly distinguished in a given inflectional paradigm, which is then said to be triptotic. In many instances however, only two cases are visible. Such a paradigm is diptotic. Inevitably, the two distinguishable cases in a diptotic situation are "direct" and "the rest", so "the rest" is given the more formal name Oblique. In a few places, forms are indeclinable or lack distinguishing forms. Such are called "monoptotic".

Unlike other languages were case-markings alone tell enough to understand a sentence, PAH required one to look to the verb too. The four different Voices or Triggers (see below) change what the core cases do. This is known as Austronesian Morphosyntactic Alignment, and is still present in Filipino languages.

The Austronesian 'direct case typically corresponded to the Nominative case back in the ANE. This was used for the subject of a clause or a predicative nominative. In Asia, however, it marked the focus of a sentence, which was what the speaker wished to keep front and center. This may change from the instigator of action, to the recipient, to the means/location, or to the reason/result.

Often, a topic-comment structure was used to add emphasis to a given noun. This was accomplished by preposing the noun phrase at the head of the sentence in the direct case. This is also called the "direct absolute" or the casus pedens. Such a sentence appears to have to subject. This can make a more difficult sentence more comprehensible, highlight a topic, introduce a new topic, or end a previous topic. This phenomenon typically requires the use of a resumptive pronoun.

Un-conjugated prepositions require nouns in the Genitive case. The unbound form of a noun (status rectus) is used as the head of a construct chain (see below), which must be in the genitive case.

State is a feature of Semitic languages that is uncommon or non-existent anywhere else. There are two states for every noun phrase: construct or absolute. (There is a third - called the pronominal state, but an overwhelming majority of the time it is the same as the construct, and will only be pointed out when different from such.) The construct state is the one of note. It is the corresponding partner to the genitive case. Older grammarians called it the status constructus. The "bound" or "construct" form of a noun typically has syllables removed from the end, which sometimes triggers other phonological changes.

Often, series of nouns are found in a "construct chain", e.g. the sons of the men of valor. All but the last are in the construct state. The "tail" must match the "head" in case. Quantifiers and Determiners may only go on the last word of the chain. Case is typically only observable on the head. Plurality markings on the tail are ambiguous in meaning.

The two kinds of Infinitive forms of verbs are called "Absolute" and "Construct", but these have very little to do with noun states.

PAH had two genders, masculine and feminine. Tagalog also has two genders.[2] Gender is intrinsic to nouns, but must be marked on adjectives, verbs, and pronouns. Like many Semitic languages, gender is marked in the third and second person. Human and animal sex generally map onto the grammatical genders. Concrete nouns and occupations are typically masculine, while abstract nouns are often feminine. Body parts are feminine, as are countries and cities (but not their occupants). Participles agree with the noun they modify in case, number, and gender.

It is a feature of ecstatic and apocalyptic vision literature to have gender discord.

PAH inflected for three numbers: Singular, Dual, and Plural. The scholars who policed the Semitic languages of the immigrants to Micronesian most clearly show their hand here, having created a consistency unprecedented in the ANE. There are no attested dual personal pronouns in early Northwest-Semitic languages, but PAH regularly employed them. No know Semitic language has dual forms for adjectives and participles, but PAH did.

The singular number was used for a single item (e.g. malku 'a king') or for a collective. Most collectives were feminine. Some nouns are both singular and collective (ecu - 'a tree' or 'a group of trees'). The difference can be seen in that a singular collective noun takes a plural verb conjugation.

The dual is used on nouns, adjectives, and verbs for things that come in pairs (hands, ears, shoes, etc.) or anything of which there are two. Some objects stay in the dual even when there are more than two of them, with an adjectival numeral indicating the total number of items (not the number of pairs). The dual is also used to refer to a single honorable person or object. This is the honorific dual --- the dual of majesty --- which is typically plural in all other languages which do so. Words that modify such nouns are typically singular, both adjectives and participles.

The dual is used to indicate natural composition. 'first dusts of the world' (Pro 8:26) would be rendered in English 'the first dust of the world.' Similarly, objects of complexity (faces, necks, sky, ocean) are usually in the dual and take verbs in the dual also.

The plural is used when there are three or more of something. Many abstract nouns are in the plural. Unnatural composition is indicated in the plural. 'Blood' refers to that which is in the body, while 'bloods' means outside of the body.

Nouns in the direct case are always definite (except as part of a direct absolute). Nouns in the indirect case may be definite or indefinite. Indirect definiteness is marked with the prefix ta.

Words with pronominal suffixes are definite without any external marker. Definite markers may be attached for anaphoric meaning. 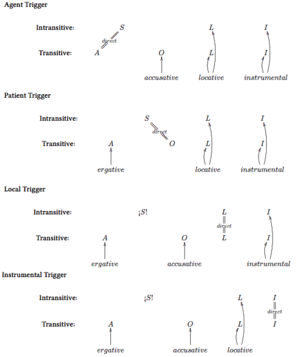 Here are the derivational patters of Proto-Semitic without endings from √Q-T-L.