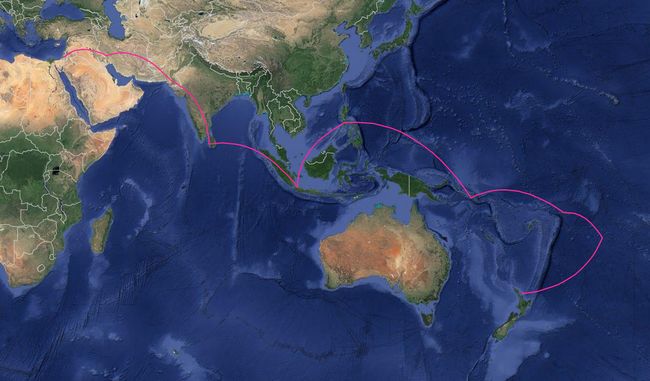 The entire, 2000 year journey of the Semitic people(s) in the Pacific.

The journey of the Semitic people in Oceania is best studied through the evolution of their language. The first millennium was the prestige period, where their skill as scribes secured power and prominence. There were two classes: the scholars and workers. The scholars were probably Eastern Semites, trained in Akkadian, Aramaic, and perhaps Ugaritic. The workers were Hebrews, Northern Israelites. They both served the Lapitan empire, whose language can only be identified as Proto-Malayo Polynesian. With copies of Yahwist Scriptures in hand, the ancient linguists "upgraded" their peasant colleagues' language into something "respectable". This language is now known as Austronesian Hebrew].

At some point near the start of the Common Era, the collapse of Lapitan hegemony saw of the end of writing in Southeast Asia for a thousand years, and the departure of the Hebrews into the Pacific. Theories vary as to the reason for their departure, but it seems most likely that they were once again sold into servitude. Then came loss of the older writing system, an indeterminate time of oral-traditional, and the development of a new writing system. Some time later, an independent colony of Hebrews was formed in New Zealand, where they were eventually hunted to extinction by the fierce Maori. The entirety of this second phase of the language is known as Polynesian Hebrew.

Comparative Semitology has benefit greatly from this unusual cross-pollination of ancient languages. The ancient scholars who helped retain the linguistic character of the diverse people in Southeast Asia brought in many elements of extra-Canaanite language, apparently from Ugaritic and Old South Arabic (not actually related to Arabic). For our purposes, the parent language of AH is "Paleo-Hebrew", which subsequently developed in the Levant into "Biblical Hebrew". We recognize that the pointing system (Niqqud) of the Masoretes is a later invention, and that even the consonantal text transmitted in the MT has been subject to later revision, but it remains a useful point of departure since so much of what we have in AH is Biblical texts.

Proto-Semitic had an enormous number of consonants, several of whom survived in Old South Arabic, but did not make it into Paleo-Hebrew.

From Paleo-Hebrew to AH, the major changes are

Like ḥet and `ayin in the consonants, the vowels require a lot of first going back before you can go forward. BH must be back-tracked to PH, but it's not as bad as it seems. Remember, Proto-Hebrew only had 3.5 vowels! 3.5 is because it would've still been just /a/, /i/, and /u/ (and /ā/, /ū/, and /ī/) like PS, except stressed ā became ō. This is called the Canaanite Shift, and it happened before the exodus from the Levant. Likewise, Philippi's Law says /i/ to /a/ in a closed, accented syllable.