The Ris language, oī́kas ri, /ɔˈɪːkas rɪ/ or simply Ris /rɪs/, is a Jasi-Jivan language related to the Kiwi and Kandi languages.

Grammatically speaking, the Ris language is morphologically fusional with a few agglutinative characteristics. It has enclitic pronouns representing the core arguments of agent and patient. It also has an unsusual morphosyntactic alignment; the active-stative one, in the fluid subject subtype. This implies a system of control and volition, closely tied to a distinction in animacy. The morphology is evenly split between nominal and verbal inflections.

Phonologically and phonaesthetically, the language is modelled after Greek. Other influences are native American languages, the Shona language and to certain degree Swedish. Ris has a normal-sized inventory of consonants and a fair amount of allophony.

Ris is my attempt to unite the sketchy constructed languages of mine; those lost forever in incomprehensible grammar, unsatisfying aesthetics and cumbersome phonologies. They stand united by the one shared feature - their relationship to the Greek language; my greatest influence no matter the language.

The following is the inventory of consonants in the Ris language. There are 19 contrastive consonants. The inventory is very similar to what you would expect from an Indo-European language, except for the voiceless sonorant, /r̥/.

Allophony is common, and a variety of processes affect the consonants.

There are 6 vowel phonemes in the Ris language.

All vowels are pronounced short. The transcription into the Latin alphabet includes no single grapheme <u>.

Ris has three numbers, all of which are equally common in the language. The Ris numbers are different to those of English, instead using a system similar to a collective-singulative distinction.

The singular (sg) denotes one, single noun, and roughly corresponds to the English equivalent of singular. A singularnoun is a single item, either of a collective noun or even a mass noun.

In addition, it also signify a pair of nouns, in certain contexts. The reason for this is historical; the old indefinite ending was similar in form to the dual ending, and eventually, the distinction between them disappeared.

The definite plural (def.pl) marks when there are multiple nouns, but more than two. It does not have the collective sense that the English equivalent does, which means plurals automatically get an article due to context.

There are two genders in the Ris language, the animate (an) and inanimate (inan). The animate gender includes only living animals and insects, as well as supernaturals like spirits and deities. The inanimate gender mainly denotes non-living objects, abstractions as well as flowers and microorganisms.

In addition to this, all Ris nouns are divided into classes. The classes are morphological and semantic, and nouns are grouped according to their gender as well as if it is inherently in the indefinite plural, or if it needs marking. There are as such four classes:

The class is the only thing indicated in Ris dictionaries, such as the Ourhagmatika, where the lemma form is always written first: 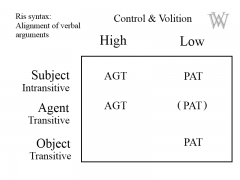 It later developed the so-called fluid-S subtype, which infers that any intransitive verb can use both the patientive and agentive cases, wich each grant a different degree of control of the verb.

The patientive, or undergoing case, (pat) is the case used to indicate both the subject of an intransitive verb and the object of a transitive verb, in addition to being used for the citation form of nouns.

The patientive is used on low control agents, and experiencers of actions - neither of which have much influence on the verb. Colloquially, the patientive can be used on agents of transitive verbs to indicate a degree of innocence, lack of control of the event.

The agentative (agt) case is used to mark the subject, or agent, of transitive verbs. The agentive marks high control, volitional agents of verbs. 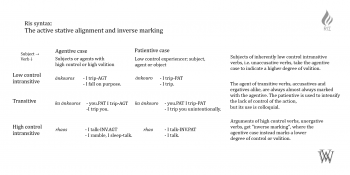 An illustration of the Ris alignment of verbal arguments, as a function of control, unergatives and unaccusatives.

Not all intransitive verbs are marked as described above. This only applies to Ris unaccusative verbs. The Ris unergative verbs inverse the marking, using the agentive as a default, low-control marking, and the patientive for high-control subjects.

An unaccusative verb is a verb that has an experiencer as its subject, that is; the syntactic subject is not a semantic agent. When the subject is marked with the agentive, the agency, control and volition is increased, and it in effect becomes unergative. It gives a sense of intent, and trying.

Unergatives are intransitive verbs and have a semantic agent as their subject. When the subject is marked with the agentive case, the verb almost unaccusative, lowering the volition, control and agency with the syntactic subject. In the gloss, unergatives have the letters inv} before the casees. Thus, an unergative with a subject in the agentive conveys a feeling of involuntary actions, or trying.

There are 7 grammatical cases in Ris. Most of these are rather common to the Indo-European languages.

The instrumental (ins) case serves a number of purposes in the Ris language. Primarily, it is used to indicate that a noun is the instrument or means by or with which an action is conducted.

Marking the inanimate noun with the agentive is incorrect. This is a distinction quite well known in natural languages, and even the Proto-Indo-European language is supposed to have made the distinction.

On subject of control in the Ris verbs, inanimate agents of transitive verbs: subjects such as "the knife" in the sentence "The knife slices the bread" could impossibly be marked with the agentive case, since the subject has no control of its actions. Nor is it experiencing the slicing, and can as such not be marked with the patientive. Instead a construction with the mediopassive and instrumental used.

Of course if desired, the agent can be reintroduced, which means a switch from passive to active.

The Ris instrumental also bears comitative and quantitative senses. It indicates actions in company with other subjects, amounts, as well as lacking things:

The last use of the instrumental, similarly to Russian and in part to English is to reintroduce a subject in a passive clause. The usage is very similar to the adpositional phrase "by me" in English, as in "He was killed", and later; "He was killed by me".

Please note, that this formation, although grammatically correct, is considered quite rude by most speakers. The subjective instrumental is reserved for inanimates for most speakers, and an active verb is used for animate subjects.

The locative case (loc) vaguely corresponds to the English spatial prepositions of "by", "at", "in", and "on". However, the Ris locative also bears a temporal usage, similarly to English "in an hour", "today", "after three o'clock".

The Ris language does have adpositions in the traditional sense, to control the exact location of the locative.

Related to location is movement, and the locative can through a construction with the lative particle ‹a› /a/, transform the locative meaning to a lative or translative one. Before a null-onset, it is pronounced /aɦ/.

The particle and the proclitic adpositions will be marked green.

The third purpose of the locative case is that it is also the main tool to express possession, a construction very close to the Celtic and Finnish equivalents, confer:

This is the one of the ways of expressing alienable possession in Ris, and it is as such never used for inalienable constructions. 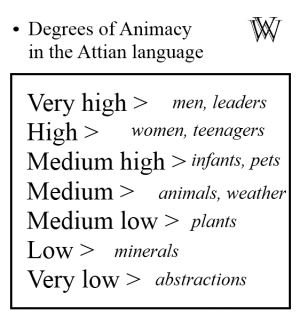 A table of the different Attian stages of animacy and salency.

Just as the Ris language makes a difference regarding gender, a fairly strong distinction in animacy[*] is made, mainly for semantical and grammatical reasons, since there is no morphological distinction.

The Ris rules of animacy dictates that no inanimate objects may stand in the agentative case. Inanimate nouns are perceived as incapable of actually performing deliberate actions. Inanimates that are the subjects of an action are therefore most often marked with the instrumental case. This construction forces the speaker to directly name an animate agent, use a passive construction, or to use an indefinite pronoun. Inanimate, or less animate nouns also have a lesser probability to be compatible with verbs connected with higher degrees of animacy, like the words for "to talk", "to think" and "control".

There are several different degrees of animacy, which at times also intertwine with salency. The grading goes from Very high to Very low and spans 7 degrees. The top and most animate nouns are humans, and especially men and leaders. Women normally rank as at least as animate as men, but they can in certain circumstances be degraded to indicate inferiority. The least animate substantives are minerals, abstraction and in part; plants.

Below is an example of someone hit with stones. Here, the subject impossibly could be marked with the agentive, taking their inanimacy in regard. Instead, you may put the subject in the instrumental case, and mediopassivise the verb. Alternatively the subject is degraded to an oblique, and a new subject is introduced.

Both verbs and nouns have different inherent animacy. Both the type of noun and verb are thus essential to interpret whether it can be the in the agentative case. Some verbs are more inherently animate than others in the Ris language, determining whether inanimate subjects may perform them; the word "to speak", thana, is used unexclusively for humans. Less animate subjects cannot perform this verb and are therefore coupled with another, more appropriate, one. Please note that only because inanimate nouns are less likely to perform more animate actions, more animate nouns may act out inanimate verbs.

Below is table with example nouns and verbs with their respective animacy. Please note that the first two degrees most often intertwine. It is common for slightly sexistic or separatistic speakers to use work-arounds when speaking about women or children: Instead of saying that they are capable, they would say they can do (it). In other terms; stative or generic verbs describing characteristics are less likely to be used with women. They have to satisfy with the appropriate dynamic verb.

Possession is a complicated subject in Ris grammar. There are about seven different constructions to indicate ownership, depending on context. The primary parameters is the alienability of the possessed, but also the animacy of the possessor.