The Yrharian languages (Jyrkyr: Jyrkahux; Jyhkagur: Jyrygux, Jyrykurax) are one of the language families of the planet of Morev, the largest native language family, which is still being spoken. The family is native to the continent of Irgva, which is the westernmost landmass of the planet Morev. Before the colonization of the planet various language families existed in Irgva and Yrharian was one of the largest by number of speakers (approximately a million), but after only about 200 local years (220 Earth years) just two languages survived having less than 100 thousand native speakers left. Other language families of this continent disappeared completely, mostly by being assimilated into the population of the Mtari colonists. After the Unknown Event (Cqadi Xalmex in Mtari) all connections with both the metropoly and other space colonies were lost and the interstellar transportation became impossible, so the Morev colony became independent, but due to the lack of population most of advanced technologies were completely lost too. Since then the colony expanded greatly occupying almost the third of the continent and all the useful land available there. 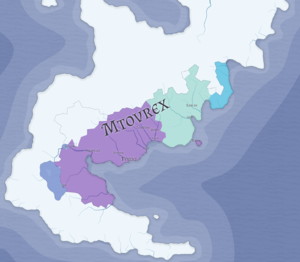 Little is known about the Southern languages, since almost all the records were lost with time. Okiattangit was the most well documented by Ragdi ne Qaxar - Mtari ethnologist and linguist, who wrote three books about the Okiatat, Kammatat and Sahpitat people in the year 178. His work shows that the language family is very old and the two groups diverged greatly. The last native speaker of Okiattangit died in 209 at the age of 65.

In days before the Mtovrex expansion Yrharians were nomadic tribes and lived on a vast territory of Irgva. Nowadays most of this people live in small towns in the northeast of the country and live an agricultural lifestyle where possible. Further north and near mountains Yrharians became semi-nomadic and try to keep their old traditions. Fishing and trade are also very important for them, as new technologies quickly entered their culture and were incorporated into it.

Unlike the Mtari people, the native population of Morev is mostly short with a typical height of 150 cm, fairskinned and darkhaired. Because of their physiology which helped them survive in a cold climate, Yrharians can gain weight very easily and are prone to many cardiovascular diseases. This and also new infections, introduced by the colonists, severely decreased the number of the native population, however nowadays it is relatively stable with a tendency to decrease further due to assimilation. A very distinctive feature of all Morev natives is their dark magenta or even purple blood which is more useful in a lower oxygen atmosphere level on the planet compared to the Earth's one. Due to this fact Yrharians consider purple color sacred and the embodiment of the lifeforce spirit Akʷyš.

The origin of the Yrharian people remains a mystery. According to the data from the first colonists they became separate from the common human ancestors about 300 thousand years ago. The most appealing hypothesis claims that all Morev people descended from a group of ancient colonisits, possibly from the ancestral homeland of the humanity itself, which explains the small gene variations among the native population. The oldest reliably dated artifacts found on the continent of Irgva is only 15 thousand years old and no signs of earlier human presence have been found so far.

Some words in Yrharian languages