Dalitian, also known as Talothic, or ὑττά ταλοθική (Talothic language) is a Maro-Ephenian Language spoken primarily by about 5 million people in Talothas, as well as small diaspora communities throughout Avrid. It is closely related to Aeranir, and throughout history was considered an important language for art, trade, and philosophy.

Classical Talothic distinguishes telic from atelic action by means of the case of the direct object. The accusative is used for telic actions, whilst the genitive is used for atelic ones. The former indicates action that have endpoints and are complete, whilst the latter have no endpoint and/or are not complete. This is distinct from the perfective and imperfective aspects, which deal with whether the action is viewed with internal or external construction.

Because atelic action uses the genitive, a non-core case, to represent its object, the object cannot take verbal agreement, and thus the middle voice is triggered. By making use of telicity in conjuncture with tense and aspect, a broad range on nuances may be expressed in Classical Talothic. Some verbs by their very nature are almost always atelic, and thereby almost always appear in the middle voice. 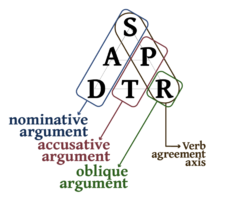 Verbs in Talothic are conjugated to agree with the number, the person, and in the third person singular, the gender of the most oblique argument given a word's valency, as defined by the DGA pyramid[1]. Here, S represents the subject of an intransitive verb, such as 'the person' in 'the person laughed.' A represents the agent of a transitive verb (also occasually called the subject), or the person or thing that does the action of the verb, such as 'the child' in 'the child reads the book.' D marks the donor, a special type of agent, who gives something or does a the action of a verb for the benefit of another, such as ‘the senator’ in ‘the senator gave the cat some milk.’ These are collectively called the nominative argument, and are expressed usually with the nominative case, but also occasionally with the genitive case in dependant clauses.

P represents the patient of a transitive verb, or the person or thing towhich the verb is done, also called the direct object, such as ‘the book’ in ‘the child reads the book.’ T represents the theme, or the object that is given to someone or something, such as ‘the milk’ in ‘the senator gave the cat some milk.’ These two roles make up the accusative argument, which is marked with the accusative case. Finally, R represents the recipient, or the person who recieves the theme from the donor, or benefits from the donor's action, with a ditransitive verb, also commonly called the indirect object, such as 'the cat' in 'the senator gave the cate some milk.'

'The house is well built'

'The farmers were drinking water'

'I'm returning the power to you'

It should be noted that a verb in the active voice must always have the maximum number of arguments according to its inherent transitivity. This means, for example, that one can never say 'John eats.' Because 'to eat' is transitive, there must be a patient, or direct object, e.g. 'John eats food.' However, there are a number of valancy dropping operations available in Talothic to allow various arguments to be dropped, which are discussed in the section on voice.

Talothic verbs are characterised by a tripartite stem system, used in conjunction with verb endings and the augment, to form its six tenses. This trait is common in eastern Maro-Ephenia languages, while it is rarer in western ones. These three stems are referred to simply as S1, S2, and S3, but may also be called more descriptively the gnomic, imperfective, and perfective aspects. Not all verbs have all stems, however all have S1 as well as either S2 or S3. Verbs lacking a particular stem are called despondent. S1 is generally seen as the base stem of a verb (and the aorist which uses it the main tense), and there are a number of different ways to derive S2 & S3.