Since [ädˈɮäːtɬ’] doesn't really roll off the tongue of the average native speaker of most European languages, the alternative name “Ox-Yew” (or the Language of the Ox-Yew People) is derived from a mistranslation of what early researchers believed the people to be called; in reality, the people of a nearby village who directed them where to find the main Ox-Yew village had said something more along the lines of: “Why would you want to go there? It's just cows and trees.”

Diphthongs are always falling, but if a diphthong starting with /i/ or /u/ appears at the beginning of a word (i.e. with no onset), it is realized as a glide ([j] or [w], respectively). 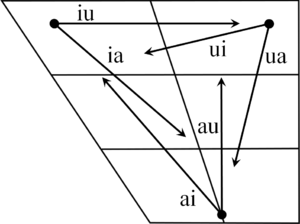 Particles and affixes may be reduplicated in order to maintain the dactylic meter, especially in formal or poetic speech.

Articles, Demonstratives, and other Determiners

The number system of Ox-Yew is nonal (base 9) which developed from an earlier ternary (or trinary) system.

The personal pronouns are borrowed directly from the “animate” correlatives, below. They inflect for first, second, and third “person” which correspond directly to the proximal, medial, and distal deixes. They also inflect for “inanimate” non-persons as well as “abstract” non-persons, though here it is important to be familiar with the noun class system, as not everything in the abstract class is necessarily intangible, nor is everything in the inanimate class non-living. For that matter, the animate class contains many nouns we might not consider animate, yet they are “conjugated” as people.

The correlatives are a group of “base” words which make up a wide variety of roots forming pronouns, adverbs, and conjunctions.

The base correlatives can be further modified by various affixes, such as –an, which converts the General correlatives to Electives (i.e. it changes the sense of “some” to “any”).

Everything below this sentence is a lie.

Ergative is used with the subjects of transitive verbs when there is a direct object present. (Only animate nouns can be in the ergative case.)

The locative is used to indicate that the noun or noun phrase modified by an adposition is stationary.

The delative is the exact inverse of the dative, invoking the meaning of ‘out of’ or ‘from’.

The genitive deals with relationships between nouns. There is a bit of overlap with the possessive and delative cases.

The possessive indicates the possession of one noun by another. Certain types of possession, however, such as inalienable possession (my father, your hand, her talent, &c) are expressed in the genitive.

The instrumental shows a noun (phrase) being used to achieve a goal. It can usually be translated as ‘by’, ‘with’, or ‘by means of’.

There are three main noun classes in Adzaay, so one might be tempted to call them “genders,” but that term really doesn't work well here, considering that all of the human genders which usually serve as examples of the various grammatical genders all fall into a single noun class. Each of these classes are further divided into three sub-classes.

Animate nouns are comprised of things which are alive and have some semblance of sentience (whether actually, or just culturally). The Animate class is divided into three sub-classes:

Humans & Animals – This one is pretty self-explanatory, though it doesn’t quite evenly line up with the boundaries of the Animalia kingdom: Some corals, sponges, barnacles, and other “lower” animals may be classified as herbs or rocks.

Trees & Sentient Plants – This group includes nearly all trees, all mushrooms and toadstools (though not all other types of fungi), sacred herbs, and plants used for medicine.

Inanimate nouns are things which are not considered to be alive. The Inanimate class is divided into three sub-classes:

Appendages – This class is comprised of nouns which belong inalienably to nouns of the Animate class: body parts, parts of plants, and even characteristics of Dragon-class nouns, such as “sparks” belonging to fire or “telepathy” belonging to cryptids.

Abstract nouns are concepts, ideas, or non-substantives, like feelings, concepts, and symbolic thought. The Abstract class is divided into three sub-classes:

Uncountable – This sub-class isn’t “abstract” in the sense we would normally think of it, but instead it is comprised of nouns which are neither singular nor plural, often substances, ingredients, or building materials, including most liquids and gasses: water, sand, marble, wood, flour, rice, honey, beans, wine.

Don't delete my stuff just because I'm lazy and haven't filled it out yet, you jerk!

Adzaay alignment is tripartite, so nouns and pronouns are differentiated for subject, object, and agentive roles by use of case affixes and/or particles. Only animate nouns can be ergative.

The structure of Adzaay is moderately agglutinative and fusional. Noun phrases are made up of particles which combine them into set phrase-words, including adjectives which they subsume.

Adzaay is predominantly head-initial, and this is reflected in many of its more granular alignments.

A typical noun phrase is structured in the following order: