Old Valthungian represents a period in the development of the Valthungian language lasting from around 800‒1200ad marked mainly by changes to geminates and metathesis of liquids, as well as the introduction of Germanic ī/j-umlaut and some small but important changes to all of the vowels. Though this is a range which experienced many changes, the most representative example of “Old Valthungian” is the language as it is captured in a few surviving texts believed to date to around 950‒975ad.

Major Changes from Griutungi (and Earlier) to Old Valthungian

N.B.: This article uses a phonetic feature notation shorthand in which all described features are limited to three characters. Please refer to the legend here.

Glide Insertion in East Germanic developed differently in Gothic and Griutungi. In Gothic, it applied optionally between two consecutive vowels only after a stressed vowel when one of the vowels was /i(ː)/ (e.g. saian /sɛ̄an/ ‘to sow’ could have a third person singular of either saiiþ /sɛ̄iθ/ or saijiþ /sɛ̄jiθ/. In Griutungi, however, it applies to both front and back glide insertion (/j/ and /w/), is not optional, and applies to any consecutive vowels where one of the vowels is not +low, so both the infinitive and third person singular present indicative of ‘sow’ show glide insertion: sǣjan, sǣjiþ.

This rule remains persistent in the grammar of Griutungi through Old, Middle, and even Modern Valthungian, though the environment of the rule may change slightly as the language changes.

“A glide (j) is inserted between a non-low front vowel and a following vowel.”

“A glide (w) is inserted between a non-low back vowel and a following vowel.”

To describe it differently, a glide must be inserted between two consecutive (non-diphthong) vowels, the value of which (front or back) is determined by the value of the first vowel.

Germanic Obstruent Devoicing is a rule inherited from Proto-Germanic which remains persistent in the grammar throughout the transition to East Germanic, Griutungi, Old, Middle, and modern Valthungian.

“A voiced continuant obstruent (i.e. β, ð, or ɣ) becomes devoiced (f, θ, or x, respectively) when word-final or before an unvoiced consonant.”

“A geminate becomes a single consonant when it occurs before another consonant or a word boundary.”

This may have happened in two stages, the first being pre-consonantal and later before a word boundary, as evidenced by the retention of some word-final consonants in Gothic.

This is a change that had likely already started long before the division between Gothic and Griutungi, and probably happened similarly in Gothic as well. In the Griutungi lineage, it occurred in three distinct stages:

Intervocalic voiced stops (i.e. /b/, /d/, and /g/) became spirantized: /β/, /ð/, and /ɣ/. This likely happened quite early, perhaps already by Proto-Germanic times, and was clearly in operation in Gothic as well.

The same process occurred, but in Stage II the environment changes to include /l/ and /r/ before the stop and any sonorant (i.e. /l/, /r/, /m/, or /n/) after. This likely occurred before or during the time of Griutung proper, and may have happened in a similar environment in Gothic.

“A voiced non-continuant (i.e. stop) consonant becomes continuant (i.e. fricative) when preceded by a vowel or a liquid and followed by any sonorant (a vowel, a liquid, or a nasal).”

In the final stage, which happened significantly after the earlier two (probably not before 900ad), the unvoiced continuants /f/ and /θ/, became voiced in the same environment as stage II.

“An unvoiced non-back continuant (i.e. fricative other than /h/[2]) consonant becomes voiced when preceded by any non-nasal sonorant and followed by any sonorant.”

Building on an Late Indo-European rule that had some implications for the development of Proto-Germanic, this change is reflected in some Gothic spellings, but has not completely come into effect yet. The reconstruction of Griutungi posits the change as complete.

“A voiced stop is inserted between a nasal and a following liquid (where there is no morpheme boundary present).”

In other words, b is inserted after m before l or r, and d is inserted after n in the same environment, as long as the nasal and the following liquid are not separated by a word or morpheme boundary (so, for instance, un+rēkīs ‘non-toxic’ does not become **undrēkīs because un- is a separate morpheme). In all:

This is an expansion of an earlier change in East Germanic in which /fl/ became /θl/ in certain questionable environments which may or may not have included back vowels and/or velar consonants (there are only a handful of attested words where this change appears in writings of the time). Shortly after the Griutungi split, all remaining word-initial instances of /fl/ became /θl/.

Voicing and Devoicing of Consonant Clusters

Voicing of Word-Final /s/ after a Voiced Consonant (~550ad)

Word-final /s/ was voiced after /b/, /d/, and /g/. (And thus I dispense with the mystery of what the phonetic and phonemic value of the /g/ of Gothic dags might have been!)

“A cluster consisting of z followed by a voiced stop becomes unvoiced when intervocalic.”

Between 600 and 850ad, many word boundaries were blurred in the Old Valthungian language. Several clitics became particles, while other words became inseparable.

Cliticization of Prepositions, Particles, and Determiners

In geminate obstruents – that is, geminate stops and fricatives – the first obstruent of the pair is lenited to /h/. (Later, in a separate process of h-deletion, these are eliminated completely.)

To put it another way:

In geminate sonorants – that is, geminate nasals and liquids – the first sonorant of the pair becomes -son, -vox and -ctn; that is, it is replaced by an unvoiced stop (in the same place of articulation).

To put it another way:

Much later, perhaps as late as 750 or 800ad, pm shifts to tm, but only in words which had previously contained geminate mm

“A stressed back vowel becomes fronted when ī or j occurs in the following syllable.”

This rule remains productive in the grammar at least through the change of iu to ju, because short i does not trigger umlaut. However, the vowel in ju from earlier iu is not subject to umlaut.

This is sometimes considered a part of Verschärfung, but I'm placing it here because it must necessarily occur contemporaneously with the iu → ju change above. More specifically, there are a small number of words which begin with the sequence ⟨jiu-⟩, and this sequence as a whole becomes ⟨gju-⟩.

The phoneme /z/ begins the same process towards rhotacism seen in the other Germanic languages. This change occurs in all environments.

“z becomes ʐ in all environments.”

There are actually several changes which occurred at different time periods which have been assembled here under the banner of “Verschärfung”. All of these changes deal with the way glide consonants change in intervocalic environments between the Gothic and Old Valthungian Periods.

Deletion of Final Unstressed /a/

Unstressed word-final a is deleted after m, n, and t; however, it is retained by analogy in inflections, such as the ending of the first person singular present indicative, or the dative singular of many masculine and neuter nouns. Ultimately, this mainly leads to the shortening of some prepositions and change of the neuter -ata ending to -at.

“Unstressed a is deleted word-finally after a nasal consonant or t.”

There is very little extant text in Old Valthungian, and what does exist is quite variable, but this is a “regularlised” version of the orthography used at the time around 850ad, with notes where there are variants.

Though there are very few extant Old Valthungian texts, obnoxiously large numbers of the Pater Noster text have been discovered. Here's one now: 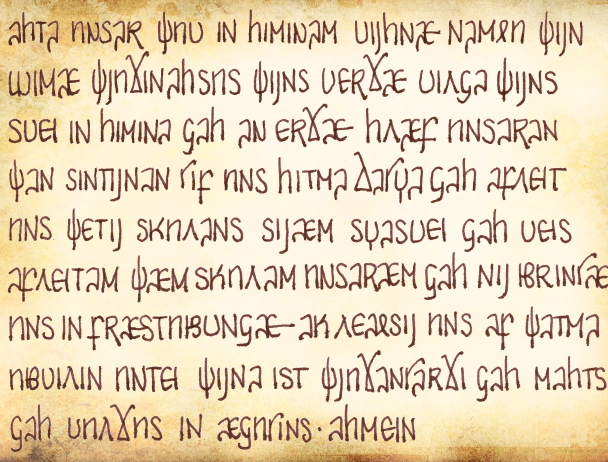