As the language of a people - the Qualdomelics (Qua. cwaldewmẹljăd) - situated in a vital bottleneck of commerce between the Eastern and Western parts of central-northern Márusúturon, many words from it have entered languages of neighboring peoples, and an older form of Qualdomelic was a lingua franca in a vast area of the continent. In the next centuries, its importance on the continent began to sharply fall, mostly due to the rise of the empire of Greater Skyrdagor to the northeast and the conquest of most lands to the south of Qualdomailor — where Qualdomelic was the lingua franca — by the Chlouvānem from the southeast. Qualdomelic still influenced both languages, with often loanwords from Chlouvānem to Skyrdagor and vice versa showing signs of being borrowed through the means of Qualdomelic first. Still, Qualdomelic itself absorbed lots of loanwords, especially religious terminology and modern-day concepts from Chlouvānem, starting from the Qualdomelics' conversion to the Yunyalīlti religion.

After a long period where its international importance was overshadowed by the far greater reach of Chlouvānem and Skyrdagor, the Qualdomelic language is now getting a revival in abroad learning, aided by the less strict visa policies and better human rights record for foreigners in Qualdomailor when compared to the Chlouvānem Inquisition, so that the country has become an obligatory destination for most Westerners interested in Eastern Calemerian culture, lifestyle, and sciences, as well as life in the environmental-friendliest country on Calémere.

Qualdomelic is a revived version of what I consider my first ever "serious" conlang (that is, not a relex), which I created in March 2014 - along with my first conworld sketch I used the name Calémere[2] for - and was called Valdimelic (Hvaldeimήḷta in the orthography I used back then) - conworld-wise, it was Chlouvānem but about fifteen versions before the current one. While, after four years, I can safely say that in my original Valdimelic there were many too naïf elements and a bit of kitchen-sinkyness here and there, in the end there was something in its sound I liked and therefore, in February 2018, I decided to "revive" it (even if apart from a few lexical items it is, grammar-wise, a totally different language) and use it to replace saKalurilut, a long-standing language in my conworld but which was too much of a Kalaallisut giblang to be justified after all those years. Its place in Calémere and a few words are thus taken from saKalurilut. As far as aesthetics are concerned, I replaced many of the too much Greek-looking words, as well as ēta and ōmega (but I kept gamma for /ɣ/) of the original Valdimelic, as well as those ideas that still survive in some way in Chlouvānem, with an aesthetic mostly inspired by Romanian, with hints of Irish, Yoruba (mainly ẹ and ọ), and that beautiful Māori wh.

Qualdomailor lies almost entirely between latitudes 30° and 39°N, and mostly has a mediterranean climate; its southernmost point is just about one mile south of the 30th parallel north. The country may be divided, thanks to its various mountain chains, in three distinct zones: the Arănngallaq plain, along the Vălțẹšp river, which lies in the central-northern part of the country and is its most densely populated part; the long but narrow western coast; and the central highlands, which are river basins that ultimately all drain into the western coast through two major rivers - the Qasivănnẹq in the central part and the Ọrăisărpiq in the far south[3] - that cut through the mountains in impressive canyon systems.
The two largest cities, Cănțe Inarviut ("City of the East", the capital), and Arvallivăt ("Red Castle"), lie in the Arănngallaq plain.

Qualdomailor, today, is a linguistically and religiously homogeneous country, with 96% of its inhabitants being religiously Yunyalīlti. Historically predominantly inhabited by the Qualdomelics, in the half century since the Kaiṣamā era there has been a steady influx of Chlouvānem people, so that 81.5% of its population is Qualdomelic, 17% Chlouvānem, and the remaining 1.5% of other ethnic backgrounds. Qualdomelic is the only nationwide official language - Chlouvānem is only official in the four southern regions, but it is widely spoken as a L2 also by native Qualdomelics due to its status as lingua franca of the Eastern bloc and sacred language of the Yunyalīlta. At the last census in 6418 (six years ago), the population amounted to 39,838,427 people; according to more recent estimates, it has grown to slightly more than 40 million people. 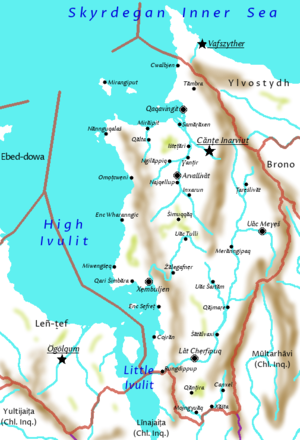 Qualdomailor is written in its own, alphabetic script (called ta Whaldewmẹlje sa šowsẹ), which is a derivative of an older form of the Skyrdegan script, a script it retains a large degree of mutual intelligibility with, despite a few differences through further simplifications the Skyrdegan script underwent and a different printing and typesetting style (the Qualdomelic script is characterized by more curved lines).

Qualdomelic orthography is morphophonemic and, to some extent, etymological. In the following table, only the most common, non-mutated spelling for each phoneme is given.

Note that the Chlouvānem phoneme /ɴ̆/ l is typically adapted in Qualdomelic as /q/ word-initially and as /ŋ/ otherwise; however, in many Yunyalīlti religious words it is adapted as /l/.

Diphthongs are typically categorized depending on their first element:

Stress is phonemic and unmarked in the orthography. The most common position is on the penultimate (e.g. vẹfnăro "sleep" /vɛʊ̯ˈnəro/; cwalăš "apple" /ˈkwaləʃ/), but words ending in stops or affricates are usually stressed on the last syllable (e.g. γrămaț "language" /ɣrəˈmats/, ivulit "sea" /ivuˈlit/).

The softening mutation has the following effects:

The hardening mutation has the following effects:

Words that trigger the softening mutation are marked by a following ʰ (e.g. the feminine singular definite article taʰ), while those that trigger the hardening one are marked by a following ⁿ (e.g. the neuter singular definite article iăⁿ). As "mutation" - căṛăwhăro is a neuter noun, in the names of both mutations we may clearly see how e.g. underlying iăⁿ uzwhăbjoăb-uⁿ iăⁿ căṛăwhăro becomes iă nuzwhăbjoăbu niă găṛăwhăro.

Note that articles are repeated before all elements in a noun phrase, e.g. ta whalăš ta arvan "the red apple", toc tiăda toc țigulic "all the calm mornings".

Possessed nouns are marked by a following postposition which varies according to the gender and number of the possessed noun. The masculine singular form is căd, the feminine singular one is ceda, while the one used for neuters and all plurals is căiši. This does not apply when the possessor is coincident with a third person pronoun, in which case there is a special suffix to use (see table below).

Some nouns, on the other hand, have a completely different possessed form and never use the possessive particle. The most common examples are camiuq "son" and camẹnă "daughter", which have the possessed forms jamwhaʰ "son of..." and jamhniʰ "daughter of...".

Modern Qualdomelic has a duodecimal number system because of Chlouvānem influence, which completely replaced the earlier, decimal one: only the roots from 1 to Ɛ, optionally 1012, and the old number 10010 (qọlbră, which nowadays is not a numeral anymore, but simply a noun meaning "a lot of", "a large quantity") survive. However, most numerals are hybrids of native roots (for the units) and Chlouvānem ones (for the dozens and other powers of 12).

As for types of numerals distinguished, Qualdomelic has cardinals, ordinals (analytic from Ɛ on; they double as fractionaries, with only ½ having a separate root), and distributives (analytic, formed by reduplication). Numbers from 1 to 5 also have adverbial numerals (once, twice, three times...).

The other dozens are:

Note that Chlouvānem short vowels apart from a usually fall word-finally; note that word-final a is not reduced to ă after a long vowel. Some examples of Imuniguro-Xenic vocabulary:

The modern Qualdomelic calendar, as well as time reckoning, is essentially the same as the Chlouvānem one.

The fourteen months (asenă) of the year are:

The main divisions of time are: