Aspiration is not phonemic. Stops and Affricates may be realized as implosives freely. ts, th can be used in the transcription of names.

Vowels are a, i, e, o, ɛ, u, and ɔ. Vowels written twice are long, but may/should be pronounced with a glottal stop in careful/slow speech.

Syllables are V, CV. CwV syllables can occur, especially bw, hw, kw, and rw. CVN may be used in borrowed words, but also occurs randomly in native words. They are written as CV.N, however. Syllabic nasal may occur in transcribing certain African languages with markedly different phonotactics.

Stress is fixed on the penultimate vowel, regardless of vowel lengths nearby.

Much of the groundwork has been laid in Afrihili : http://fiatlingua.org/2014/04/

Quite a few morphemes are attached to words using an "echo vowel." For example, the passive suffix is -bwV. A word cannot end in that, so the previous vowel is repeated after it, so that sana see + b-wV > sanabwa be seen, and kabe advise + -bwV > kabebwe be advised. The agent noun prefix, Vm-, works similarly, except the vowel is repeated before the prefix, Vm- + okola work > omokola workman.

All common nouns begin and end with a vowel. The plural is formed by replacing the initial vowel with the final vowel, as in akalini pen and ikalini pens. This appears to have been inspired by Yoruba, in which very many nouns start and end with vowels. While the initial vowel has no semantic content, nor does it mark class as it would in most Bantu languages, it is still used in a form of agreement reminiscent of Swahili and other Bantu languages. An attributive adjective follows its noun and has the initial vowel of the noun prefixed to it, and a -n suffixed. So, sabo is new, akalini asabon a new pen, ikalini isabon new pens.

The order of multiple adjectives is color, size, quality, number,

The notion of "by (a month)" combines two adpositions, ɛn Shaba fo by August.[1] 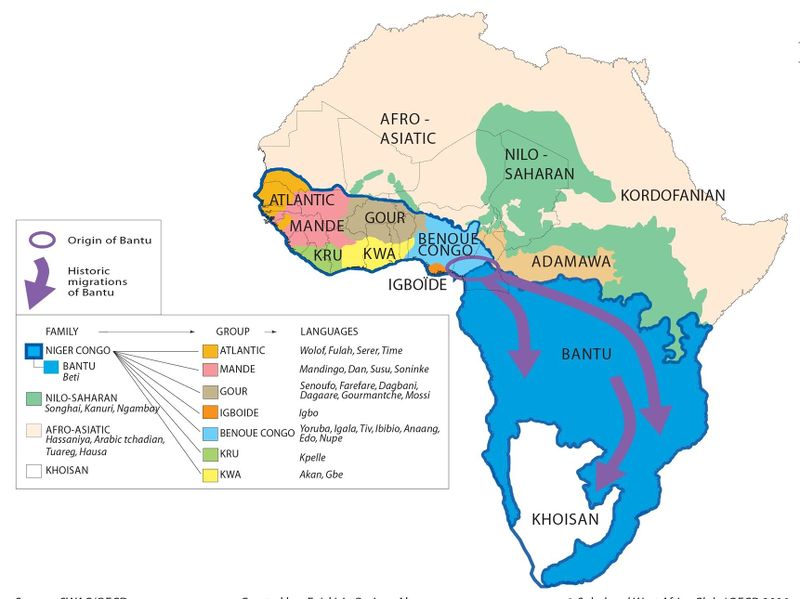