The largest planet is Xeñih and the smallest is Ałoð. 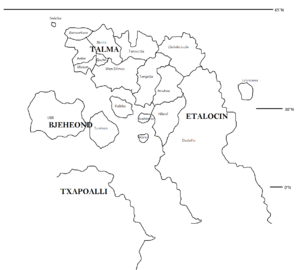 The Bitaleta (Bjeheond, Etalocin and Talma) area is often called the "North" or similar in Trician languages.

TODO: Residual and spread zones within each continent.

The following describes the Talman calendar, which is now a global standard across Tricin.

Year 0 marks the founding of the Windermere Empire. Negative years are written with a minus sign.

A seven-day week is used. The names of the days of the week in Clofabosin are:

Fossil fuels are less abundant than on Earth, which has forced Tricians to rely on nuclear energy. [also slowed down tech progress, but Trician civilization also grew more sustainably than Earth civilization] (?)

Like Crackfic Tricin, Canon Tricin itself was a result of a terraforming event where Earth organisms, including early humans, gradually took over a previously uninhabitable planet via a one-way wormhole. All organisms on Tricin come from Earth lineages no older than the Miocene. All modern Trician humans are our Homo sapiens sapiens.

The difference between Canon and Crackfic Tricin is mainly in when in Trician history later Earth immigration occurs, and what lingua francas are in use in Canon Tricin.

The Trician musical traditions could be classified roughly as follows. (See individual subpages for more info.)

Modern Talmosphere art music is often a mixture of all these elements.

Roughly in order of number of speakers:

Some major language families are:

Programming languages usually have Scellan keywords and use Polish/prefix notation. Some common languages are: