Modern Naeng is a revived koine/lingua franca/creole arising from various Classical Naeng reading and interpretive traditions, and some scholars believe that Modern Naeng grammar doesn't directly continue that of Classical Naeng. An even more unorthodox view proposed by modern linguist Lămanoa Wadangpaş is that Modern Naeng should be thought of as a Lakovic-Netagin-Nurian hybrid language, unlike Tseer and Tergetian vernaculars which are true Lakovic languages; he thinks Modern Naeng is in part a relexification of Netagin and Nurian with Classical Naeng words, and he proposes that it be renamed to fi brits Biechănd or the Bjeheondian language. This hypothesis is challenged by Prăfin of Bălang and other scholars of creoles and sprachbunds in Tricin, who cited various historical intermediate stages of Naeng which appeared in writing (e.g. works by Etsoj Jopah) and in folk songs. For example, the polite pronoun Pra (from pida 'sage'), which is post-Classical, is found in ___'s letters.

Naeng is based on similarities between Hebrew and Mon-Khmer languages, such as final stress, minor syllables and head-initial syntax. Aesthetically it's also inspired by German, Romanian and Tíogall, one of User:IlL's old Talmic sketches. It was originally created by Praimhín for the Fifth Linguifex Relay.

Lakovic no longer has gneder; get rid of gendered pronouns?

Merge c and g and introduce Ch clusters? or should those become breathy voiced vowels

nean - a verb of motion/direction

Directional verbs as in Southeast Asian languages, e.g. ngămlac seaf "to call someone" vs ngămlac drel "to call someone back" -- sometimes casual Naeng uses these rather than pronouns to disambiguate referents like Ien chea briets drel sed "He told me this"

Pronouns aren't used as often in colloquial Naeng e.g. Fi tsum rad? for What's your name? Formal Naeng would have Fi tsum łe/łen/łes rad?; Seaf ra? for "Where are you going?"

More directional markers which work like serial verbs besides seaf/drel?

All dialects have the following consonant phonemes, but their realizations and conditions for allophony differ by accent. Below, the Standard Bjeheondian transcriptions will be given:

/h/ is [ɦ] between voiced sounds. Many speakers drop /ʔ/ and /h/ in casual speech.

In some rural accents in eastern Bjeheond, around Plüeng Sănach, and in some styles of singing, r is pronounced as an alveolar trill /r/ in all positions. In the Wieb accent r triggers a low tone onset on the following vowel, and in contemporary Wieb Naeng this is the only sign of phonemic r, with initial /r/ entirely replaced with [h].

ff thth ss may be used to transcribe /f θ s/ in other languages.

/ʁ/ vocalizes to [ɐ] when not before a vowel, as follows:

Standard Naeng intonation is like Standard Khmer. In certain accents of Naeng, especially in the Wieb region, stressed syllables with a final voiceless consonant are pronounced with a rising tone and other stressed syllables with a falling tone. In contemporary Wieb Naeng final voicing is no longer contrastive, having entirely been replaced with tone -- Wieb Naeng can be analyzed as having four tones.

Stress is almost always final, but can be non-final in function words.

Zero and C are the only permitted word-final codas. /g h ʔ/ are phonemically prohibited in coda; in most accents of Naeng final c surfaces as [ʔ].

Allowed initial clusters in Classical Naeng are similar to Khmer. Here is a list by type of cluster (some clusters may be listed more than once):

Voiced stops are not allowed to begin minor syllables in roots. This rule does not apply to proper names such as Dămea.

This script is the one used in the Mărotłite sacred texts (the Imθumăytil and other pidaic writings) and other Classical Naeng texts. It descends from Talmic runes and is thus a sister of the Talmic alphabet, which is used for Talmic languages. Nowadays it is mainly used for religious (Mărotłite announcements/edicts/rulings/etc.), ceremonial, and decorative purposes.

Consonants have capital and lowercase forms. Names and extremely respectful pronouns are written in all caps.

The alphabetical order for the consonant letters is:

The vowel signs are placed to the right of the consonant letter. 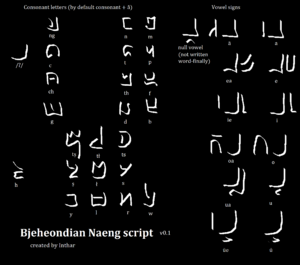 The modern Naeng script is an abugida related to Idavic scripts. It derives from an old Bjeheondian runic alphabet, which was in turn an adaptation of an even older logographic writing system used by the Dábhiaŋal (Naeng Dobingal) civilization (from ancient Erkwisngwal).

The nonspecific-specific distinction often makes pluralization unnecessary where English would require it:

The articles contract with a preceding preposition such as mi 'in, at' and șa 'to, for': for example, mis, mif and șas, șaf. Before a sibilant (resp. labial), forms such as mise (resp. mifi) are used.

Modern Naeng have pronouns similar to Classical Naeng, but slightly restructured: it lost the feminine plural pronouns and added the impersonal and polite pronouns.

In Middle Naeng, Pra was sometimes a third person pronoun but this is archaic. Ĭmpra is an obsolete plural form of Pra; nowadays Pra is used regardless of number.

rie 'I' can informally be used as an impersonal pronoun.

Verbs are not conjugated, but are used with tense particles.

Archaic style may use the vocative particle ha or hay: Hay tsrin....

Negative imperatives are formed with taș:

Modern Naeng does not have exact equivalents for the English verbs "go", "carry", or "bring". Naeng motion verbs vary along two dimensions: one dimension is the method or direction of transport and one dimension is the telicity of the verb. Unidirectional, or telic, motion verbs express one-time motion towards a destination. Multidirectional, or atelic, verbs express undirected motion, repeated directed motion, or back-and-forth motion. The directionality is usually expressed by an infix or prefix, but is sometimes expressed through suppletion.

The copula mot is not used with adjectives. For example, 'The man is strong' = Fĭ noaf ngăwes.

The word for 'than' is ăngi 'surpass', and rech is not necessary when ăngi is used. Colloquially the similar-sounding ngĭ 'like' may be used instead.

For comparing two verbs or clauses, you need to use ăngi fid moang or ăngi foang, lit. 'than that which':

There are no imperatives for adjectives; one uses ieng 'do', căfol 'become', or ămtüs 'remain' with the adjective depending on the situation. For example:

Existence is indicated using ruay 'to have'; indeed, this is the more archaic meaning of ruay.

Verb phrases are usually of the form:

Serial verbs are common as in Southeast Asian langs. Negated as follows:

Rie sișpeal die tsäl
'I don't understand [what was said]' (lit. I hear not understand)

SVO clauses are inverted to VSO clauses after certain conjunctions. In a VSO clause the particle e must precede the subject.

moang is the relativizer. It is often dropped when the relative clause is short (most often with adjectives).

English what-clauses are translated with fid moang... or foang.... foang is also used to translate the [adjective] one in English:

Modern Naeng contains more Netagin and Talmic loanwords than Classical Naeng; even derivational affixes have been borrowed. In modern times, many Eevo loans are entering the language, to the dismay of purists.

The "trigger" infixes usually derive verbs from other verbs. These were originally trigger affixes but had become derivational affixes to derive verbs by Classical Naeng times.

Many Proto-Lakovic aspects had become derivational by Classical Naeng, analogous to how PIE aspects became inflectional or lexical in daughter IE languages. This mirrors the development in other Talman Lakovic languages but Naeng has been the most heavily affected.

Should inflectional tam be more complex?

Head-initial concatenation is often used to derive expressions that would correspond to words in English: e.g. hălwier-chne 'mathematics' (lit. 'beauty of ideal/order').

The resulting meaning from concatenation is not always entirely predictable:

I: An object stays at rest, or at a constant speed, unless a force acts on it.

II: The change in the momentum of a body is proportional to the force applied to the body; and the change occurs along the straight line on which that force is applied.

all action have SPEC action-against equal

III: Every action has an equal and opposite reaction.

You are not obligated to complete the work, but...

(This line is in the Naeng alexandrine)

Warming Up to You

A literary Naeng meter is determined by

The most common meter in literary verse by far is the anapestic tetrameter: (u)uSuuSuuSuuS. It is also used in the King Sămtsay Song, the Bjeheondian national anthem.

Some other meters are:

Iambic meters and meters that use a combination of iambs and anapests are also used. An iambic meter that goes back to Classical Naeng verse is the chinung tălach ('hexad meter', more literally 'hexad count'), a form of alexandrine where each line consists of two iambic trimeter hemistichs separated by a caesura. The first of each group of three feet may occasionally be a trochee.