The genesis of the modern Scellan language, dated to ca. fT 1792, is often credited to the Scellan philosopher and poet Oovsari Vyhalv. Scellan constituted a rejection of Mărotłism which used Tigol as a liturgical language; it prefers to cognatize Tigol words rather than borrowing them directly. The name Eevo refers to its origins as a Scellan koiné. Modern Scellan has been a living language for about 500 years, approximately fT 1792-2292.

Many of the most drastic changes from Old Scellan are a result of rapid "creolization" as a result of second-language speakers learning the language.

Scellan has a slightly larger-than-average consonant inventory of about 27 consonants.

The vowel inventory of Scellan is also fairly large, with 8 or 11 basic vowel qualities depending on the accent. Scellan also has many diphthongs, in addition to nasal vowels (in "nasal" accents such as Standard Fyxoomian; these vowels are written with l or ñ in the Scellan orthography).

The diphthongs are written as follows:

The nasal vowels /ĩ ỹ ũ ẽ ø̃ ə̃ õ ɛ̃ ã ɔ̃/ arose from historical V + /l/ and V + /ŋ/ sequences. In many accents they are also pharyngealized or diphthongized. Most accents merge some nasal vowels with each other or with other vowels. "Non-nasal" accents, such as the Standard (Alcvean) Scellan accent, realize them as long vowels (with no nasalization) - these accents may have "linking" and "intrusive L" realized as [ʁ] or [ɴ̆] analogous to linking and intrusive R in non-rhotic English accents. A handful of remote dialects pronounce them as pharyngealized vowels or vowels followed by [ɫ].

This is how nasal vowels are written in the orthography:

Stress is not marked in the native orthography. Talmic words usually have initial stress, but prefixed verbs are usually not stressed on the prefix. Windermere loans have final stress.

The romanization used in this article and related material will mark non-initial stress with an acute accent.

Scellan has a distinctive intonation paradigm. It originates from discursive uptalk in older stages of the language, which has since generalized to all declarative sentences. A few conservative accents in Scella do not use this pattern. 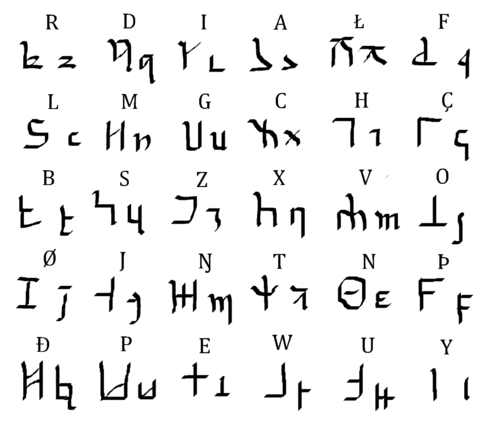 Scellan is written in the version of the Talmic alphabet, which is related to the Talman Windermere script. The Scellan alphabet has 30 letters.

Stress accent is not marked. (However, in materials for English speakers we will mark stress.)

The letters l and ñ are only distinguished word-initially and at the beginning of stressed syllables.

Scellan uses a base-10 positional numeral system. The digits are as follows:

Scellan inflectional morphology tends to be simpler than most other Talmic languages; for example, it has no grammatical gender, no case, and no number inflection on nouns.

Verbs have little inflection, and the bulk of verbs are completely regular.

Scellan preserves the Tigol tense system very well, but most of the forms have been replaced with analytic forms and particles. The following table roughly organizes the tense system of Modern Scellan as well as the regular forms for each in terms of principal parts (PRES = present stem; INF = infinitive; PST = past participle); These are not all of the possible tenses as different constructions can be combined, e.g. Tynd fa dy desg naw lly nee rree. 'I have been eating for three days.'

The direct object, if there is one, goes behind the faulty accusative ym.

The cohortative is formed by using the particle gw after the verb.

The present uses the unmarked form of the verb followed by the subject. For example, Duvwñ, mol naw iar means "Teacher, I thank you".

The conditional uses the suffix -ð. It continues the Old Scellan past subjunctive.

The conditional must be used when using the word matósg 'almost' in the past tense.

The imperfect uses the particle jo.

To form the progressive, the particle dy is used before the verb.

Unlike in English, verbs referring to emotional states also use the progressive in the present tense. For example, Dy ell naw'r means "I love you," and Dy faiðin naw cwig tyn tamranáls ny coo. 'I am happy because my son has graduated.'

The preterite is used to describe completed actions. It used to be ergative in Middle Eevo, but since lost its ergativity.

The perfect, formed by placing tynd 'after' before the verb (often shortened to tyn or tn'), is used for:

The perfect is being used more and more commonly for any past event, especially in Fyxoomian Eevo.

The future imperfective uses the -t affix inherited from Old Scellan. It is used for:

The future perfective tense is formed with so + VERB. It is used for:

Normally the jussive is formed by using the complementizer emb before the clause:

The morphological jussive is high-register and is formed with the suffix -or. It can be used in conditional statements expressing a generally true rule.

The copula is the most irregular verb in Scellan. In the present tense, zero copula is used.

Scellan nouns do not inflect, even for number. For specific nouns, number is marked using articles and combined forms of determiners and possessive pronouns.

The direct pronouns are used as pronominal topics, subject markers and objects.

Scellan has a 4-way contrast in demonstratives:

Adjectives behave like verbs in that they can take tense clitics. However, imperative constructions must use fa + ADJECTIVE.

Adjectives usually follow nouns; they may precede nouns in poetry.

Adverbs can be formed from both verbs adjectives by adding dy before the verb or adjective. However, often adverbs are unmarked.

Unlike other Talmic languages, Eevo has lost the Tigol comparative and superlative. However, some fossilized comparative forms have become new words in the modern language.

A few adjectives have suppletive comparative and superlative forms:

'Than' is translated as raw.

An adjective may be placed in the construct state by suffixing -að. Construct adjectives are mainly used in constructions like hnoosað ers 'easy to learn', and lloosað fiah 'red-eyed'. In addition they survive in some fixed expressions and prepositions.

Domains that commonly use Windermero-Eevo:

Domains that commonly use Tseero-Eevo:

Scellan also has phrasal nouns: these are noun-preposition combinations that are stressed on the preposition.

We measure the nucleating eukaryotic folding of the TSP3 gene in Bruchorium sponercii. TSP3 encodes a protezine-binding receptor kinase located at the cytotubular microsporellata of the quanticular ribosome, and malfunction of TSP3 is commonly believed to be the source of cybothrotic cancer. In this paper we prove using a Rɪᴇᴛᴢᴇʀ-Yᴀʟɪɴꜱᴋʏ double-blind test that TSP3 binding to the phyllochrypsinase inhibitor occurs (p = 0.856) in the hypotrellome of a healthy Bruchorium cell when adenotoxin concentrations are low. This research will have significant implications for the study of symbrychous descloroma.

If not now, when?

SALEM: Dimbehd, oos a nert cellws ry þus a solyñ lly oðyñẃð a roféelah, as nai joor, rrawbin a þwðilás, a frañádlu, as a hylþwłyðép bo Am llyfós na garjol lly esnam a çrumi.
[however], even SG spark small-SUP of hope A enough to ignite SG change, and with course, carry-PST.PART 3PL ERG SG passion, SG giftedness, and SG ingenuity toward tools to balance SG table
SALEM: However, even the smallest spark of hope is enough to ignite change, and in time, Man's passion, resourcefulness and ingenuity led them to the tools that would help even the odds.

SALEM: Mia ras a jo fial a dy paloþreh "a Si". Nai þi a devna a moxíaf, rwvin Am øþ meñ a maslan, as dy isír ysli, divin lleed, biniñcymẃax, as dy comol, arm.
SALEM: This power was appropriately named "Dust". Nature's wrath in hand, Man lit their way through the darkness and in the shadow's absence came strength, civilization and, most importantly, life.

SALEM: As tev octlúast awr, a maslan a forrit.
and when vanish-FUT 3PL, darkness A return-FUT
SALEM: And when they are gone, darkness will return.

The reaction that we'll be doing to make the anisole is called the Williamson ether synthesis, and I'll cover the mechanism later on in the video. In terms of chemicals, we have four major reagents: sodium metal, methyl iodide, phenol and methanol. We'll also need some sodium hydroxide, some dry calcium chloride, and some dichloromethane for the workup. To start things off, I added 150 mL of dry methanol to a round bottom flask. Once I'm done adding the methanol, I then move on to preparing the sodium metal. Before the sodium metal can be used, we first have to clean off the mineral oil that it was stored in, and then we have to chop it up into smaller pieces. Using a knife I took out a reasonably-sized chunk, and I tried to wipe away as much oil as I could using a paper towel. When I felt like most of the oil had been removed, I dropped the sodium into a beaker. I fill the beaker with toluene until the sodium is covered. Mineral oil is soluble in toluene, so this is just an added step to get rid of as much of the oil as possible. Using my very rusted knife, I try to agitate things as best as I can. After something like a minute, I felt like it had been washed decently enough, so I took it out and placed it on some paper towel. Now for the slightly more fun part where we get to cut the sodium and weigh out about 8 grams. Using my knife, I cut away some moderately-sized pieces and I place them on the scale. The freshly cut sodium is nice and silver, but it very quickly tarnishes. Once about 8 grams are weighted out, I put the sodium to the side and remove the scale. The sodium metal that is left over that we don't need is placed back under mineral oil for storage. Coming back to the round-bottom flask with the methanol in it, I go ahead and dump in all of the sodium. You can see that the sodium reacts quite vigorously immediately after being added. The reaction is going to heat the methanol to its boiling point, and a lot is going to boil off, so it's very important to have a high-efficiency condenser.

If a man has food and his neighbor has none, and he gives him food only on the condition that his neighbor ceaselessly beg and abase himself, would this be honorable? No, it is only a pathetic case of exploitation! Let the man work as a paid laborer at least, that he might stand on his feet and care for a family. Now does your judgment change if I say “god” instead of “man”? —ne-Zim

Rhyming poetry is often said to be from Windermere and Tseer influence, as poetry in these languages tend to use rhyme. This supplanted ___ used in Tigol poetry. Eevo uses stress-accentual meters like trochaic/iambic/dactylic meters: the iambic pentameter is common as in English.